It’s been a good while since I’ve had the time to visit blog-land, mainly down to starting a new job which has consumed most of my time and energy for the last few weeks. But, as with all significant life changes, things are gradually settling down and I’m able to get back to doing the things I enjoy, albeit less frequently.

Last Sunday was a lovely, almost warm sunny day and I was keen to take advantage of a free afternoon and get out for a wander. Stepping out of the front door I was still undecided where to head for, but the sight of a Peacock butterfly, aroused from hibernation and looking rather faded and a bit battered around the edges decided it for me and I set off for Bryn Euryn hoping to find more.

First Peacock butterfly of the year

Peacock nectaring on a dandelion

A few minutes later and I was standing on the woodland edge of the quarry field which is golden with dandelion flowers lifting their faces to soak up the sunshine.

I spotted my first butterfly within minutes, another Peacock, slightly less faded than the garden one but even more battered, poor thing.

The Peacock was resting on a bramble leaf, but not for long – a Small Tortoiseshell fluttered into its territory and it took off in rapid pursuit.

The Small Tortoiseshell was in much better shape than the Peacock, its colours were brighter and there were no signs of damage, but the frequent intense aerial battles with the larger Peacock, who was clearly not in need of my earlier sympathy for his condition, may well take their toll.

Although delighted to see these two beautiful butterflies so soon after arriving here, I was even more pleased by the presence of two male Orange Tips that were racing up and down the field edge, pausing for the occasional skirmish with one another before continuing their frantic patrolling. I had a feeling of déja vue and was transported back to this time last year when I spent ages following Orange Tips back and forth along this same field edge, fruitlessly waiting for them to pause for an instant so I might get a photograph. So, imagine my delight when I spotted one hovering around a valerian flower seeming to be about to settle. My problem was that I was a good few metres away and I daren’t move too quickly towards it in case I alarmed it. I could hardly believe that my luck held and it did indeed settle and stayed put for a few precious moments allowing me to get a couple of reasonably good shots of it.

It would have been good to catch him with his wings open, but I’m not complaining.

There was another of the ‘white’ butterfly species nearby too, this one the Green-veined White. In contrast to the Orange Tip, they are much easier to photograph, having a weaker flight and settling more frequently and for longer.

By now I had reached the top of the field and although there were other insect distractions here I could see yet more distant flutterings at the other end, so retraced my steps. What I had seen turned out to be a Comma, also being drawn into skirmishes with the Peacock.

The Comma was a lovely fresh one too, but was reluctant to fully open its prettily shaped wings.

A good view of the butterfly’s underside, showing the white mark that gives it its name

Watching the Comma yet another species caught my eye, this time a little Holly Blue that was fluttering around ivy growing up through a tree. It didn’t settle, so I didn’t feel obliged to negotiate brambles and stinging nettles to reach it, but to acknowledge its presence, I thought I’d put in a photograph I took earlier on in the garden.

Last but not least of today’s sightings was of one of my favourite butterfly species, a fresh, feisty little Speckled Wood. 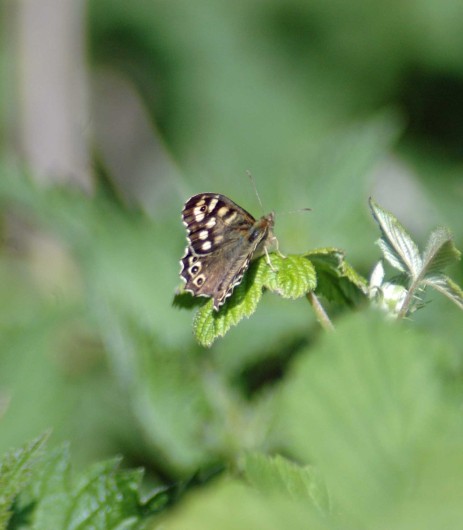 I added a Large White to my ‘tick-list’, but didn’t get a photograph. Eight species of butterfly in a matter of a few minutes and all within such a confined area was quite magical and far more than I had expected.

2 thoughts on “A Butterfly bonanza”