Herring Gulls have featured in a good few of my posts: they are a characterful part of everyday life here in Rhos-on-Sea and although they make noisy neighbours, are somewhat bossy and seem to delight in covering our cars with their guano, life would be the poorer without them.

A couple of weeks ago, on June 8th to be exact, I was woken at some ridiculously early hour by a great cacophony of gull cries and shrieks being made right outside the bedroom window, which is just a metre above the large flat roof of the kitchen below. I am fairly used to their late spring-early summer, very early- morning territorial proclaiming racket now, but this was not the usual wake-up alarm, which I have learned to almost ignore, so I had to get up to have a look.

The fuss was all about a single, fluffy brown-grey speckled chick. How it arrived on our roof I have no idea, I know there are nesting birds somewhere up on the main roof around next-door’s chimneys, but as far as I am aware there were no nests on any part of the lower flat roofs this year. So, had it fallen from a nest higher up, or even been carried down? If the former, was it OK? I had no way of knowing, just one more thing to worry about! (We have had young gulls here before, but bigger older ones that had left nests deliberately).

Although early in the morning it was already very sunny and the parent birds ‘parked’ the chick in the shade of one of the ‘lanterns’ set into the roof. That possibly explained why they were on our bit, neither neighbour has any shaded areas, although still no clue as to how the chick got there.

Parent watching the sky for trouble

The fussing, flapping and general hullabaloo continued for some while, but gradually the ruffled feathers smoothed and the excitement mellowed into an uneasy peace.

Once their offspring was settled, one parent stayed on close guard, the female I think, whilst the other either went off to look for food or maybe to sit higher up on the main roof to keep look out. The one that stayed remained wary, keeping a watchful eye on the sky above and patrolling around her chick. She did settle next to it eventually, but was very restless. 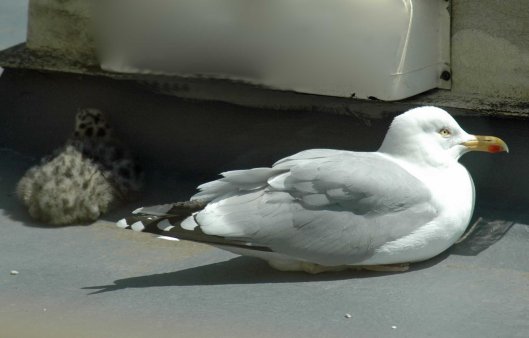 Then of course, once she settled down, the chick woke up and stood to stretch its legs. That came as a relief, at least it wasn’t injured and about to expire.

The chick was soon keen to investigate the world around him and went for a little wander. Fortunately it chose to wander onto the adjoining next-door roof which is covered with mossy lichen and he was pretty well camouflaged there. 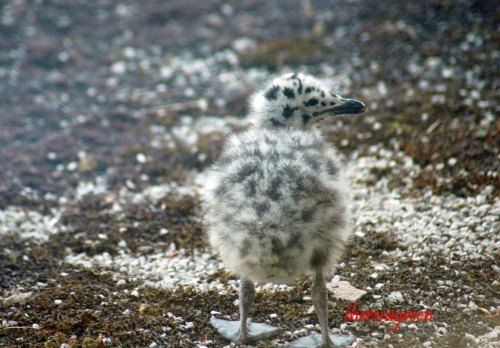 8/6/13 On the adjoining next-door roof, the chick was almost perfectly camouflaged

After a surprisingly short length of time the parent flew off and left the chick to its own devices, although as I said before it’s possible the other one was watching from above. And food has to be searched for.

Mum back with breakfast

The adult gulls were very aware of my interest in them and stood immediately in front of the window squawking and giving me distinctly threatening looks. 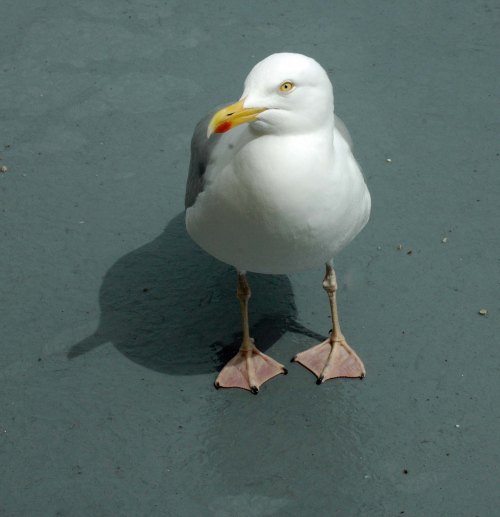 The female gull watching me, giving me the evil eye.

Female Herring Gulls are slightly smaller than the males and have a ‘softer’ look to the eyes (usually), but I’m glad I had glass between us, I would not like to make her angry and be within striking distance of that beak. (All of my photographs are taken through the glass of the window!)

Gull life settled into a bit of a routine over the following few days. The family doesn’t spend the nights on our roof and I can’t see where they go, but they arrive back noisily in the mornings. The chick gets left alone a lot, initially resting in the shade and relative safety of one or other of the lanterns, but now it is bigger it wanders more, investigating anything and everything that looks vaguely edible. The parents are diligent in their feeding, arriving back with regular meals, their arrival always announced with a great deal of vocal noise and exaggerated wing flapping. The young one is already beginning to practice the territorial, concerted squawking, joining in with its parents when they perform to whatever is above them. Herring Gulls are proper drama queens.

13/6/13-One week on and the chick is getting bolder. Checking out a cable to see if it’s edible

2 thoughts on “There’s a new gull on the roof”