Every spring I watch various species of bird select oddments of dried grass, leaves, feathers and a variety of other bits and bobs and am awed that they are going to put them all together and fashion them into a perfect home for their future family. How on earth do they know how, when and where to begin? I mean, I am pretty dexterous with my hands and can put together items by sewing, knitting, crocheting etc., but I wasn’t born knowing how to do that; I’ve had to learn how to do things and then practice to perfect the techniques over years. And I have two hands, eight fingers and two opposable thumbs to work with. A bird has one beak. Furthermore the whole process is often completed within the space of a few days, and each and every nest perfectly conforms to the design that is unique to the species of its builder, with no instruction needed. Amazing.

I still recall the thrill of finding birds’ nests when I was young and exploring the hedgerows and woods around our home, but didn’t really think much about how the nest had been put together then, being more curious about which bird had built it and how many beautiful eggs were in it. Now I take a much keener interest in the nest-building process and in the structures themselves and love to take advantage of opportunities to have a closer look at the structures of those I have found.

The first two photographs below were taken in Spain and are of a nest blown out of position during the winter following its successful use. It was built by Blackbirds in the fork of a yucca tree just a couple of metres from the kitchen window and in which three young ones were successfully raised. 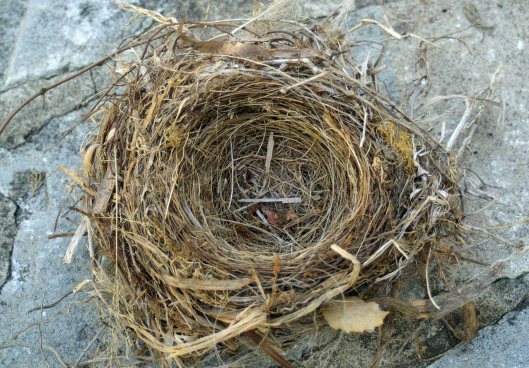 A blackbird’s nest blown from a tree branch

Blackbirds build classic archetypal cup-shaped nests utilising the natural materials available to them. Partially concealed from my view I couldn’t see exactly how the work was done on this one, but I did watch both the male and the female of the pair carry in materials, long strips of dry palm leaves, twigs and leaves to begin with, which made up a substantial base. Once that was in place the bird would have built up layers of finer materials, working each strand into place, working around herself, turning and weaving each one into place to build up the sides of the cup. The turning action keeps the inside of the cup smooth and well compacted, then when it is completed she will strengthen it further with mud.

You can see that the layers of grass become progressively finer from the outside inwards. The bottom of the nest looks rough and messy, but the bulk of material provided a substantial base, filling out the space in the fork of the tree. It is also thought that birds may deliberately leave the outsides of their nests untidy as a method of camouflage, hoping a prospective predator may mistake it for a pile of debris. 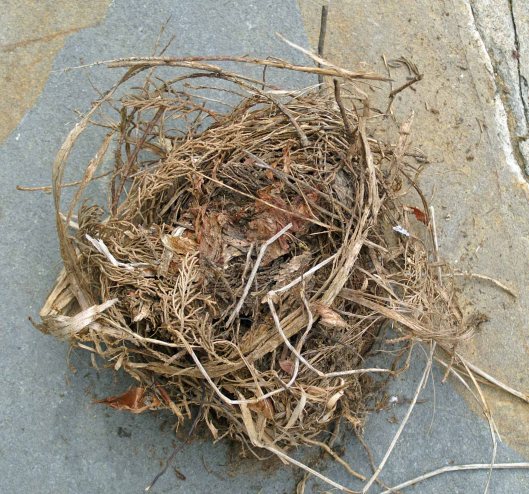 The bottom of the nest

Chaffinches also build a cup-shaped nest and once again I had excellent views of a beautiful nest built on a branch of a cork oak tree that overhung the garden wall and was on a level with and very close to a first floor bathroom window. Honeysuckle had climbed up into the tree providing extra  cover, but the most impressive camouflage was in the use of the blue-green lichen on the outside of the nest. Taking pictures was quite challenging, I was in the bath beneath the window, trying to get a view first through the vertical window bars, then through the branches and foliage. 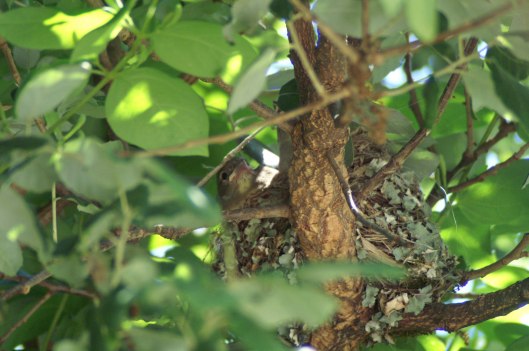 The beautifully crafted nest of a pair of chaffinch. The occupant was the last of 3 chicks to fledge and was reluctant to leave its cosy home.

We found the goldfinch nest on the ground beneath pine trees around a picnic area of the Sierra de Nieves Natural Park, near Ronda, Andalucia, whilst out walking there. We knew it belonged to a goldfinch as, sadly, we also found a couple of partially-feathered dead nestlings close by too. Maybe it had been blown out of the tree, but it is also possible a jay may have raided it, there are plenty of them thereabouts. It was such a delicate but cosy little nest too. 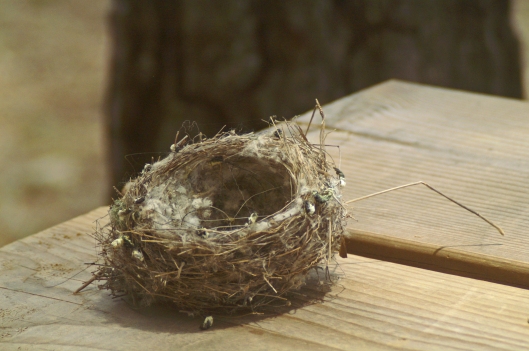 A goldfinch nest, cosily lined but dislodged from a tree

I love wrens and had the privilege of their close company during much of the time I lived in Spain, they seem much more ‘confiding’ there for some reason and are often happy to use the facilities people provide for their own use as nest sites. In our case a terracotta light fitting, fixed in a covered area between the kitchen and garage doors was used for two successive years with the male using it as a roosting place when vacated by his family. 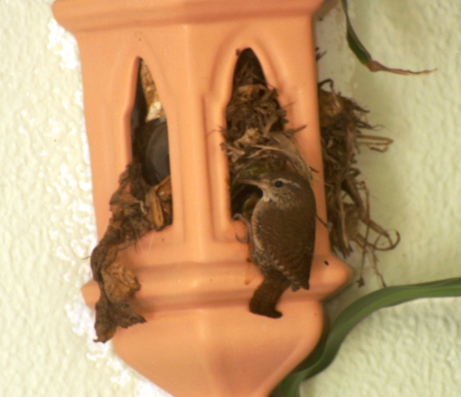 Male wrens are the nest builders and will construct a number of basic nests in several locations which he then shows off to prospective mates. ‘Our’ little chap began work on the light fitting nest early in a February, carrying in leaves and dried grass, then used it as a night-time roost for himself until April. I thought he’d left then , but one morning he reappeared and set about making some improvements, working hard over a period of days carrying in leaves and dried grass, until the space looked stuffed to capacity. Shortly afterwards he performed quite a spectacular and noisy display on a roof beam close by, clearly to impress a female. She subsequently appeared, inspected the nest, approved it and set about making the place more comfortable by lining it with moss she pulled out from our lawn. I helped her out a bit by pulling out more moss and putting it on the leaves of a large house plant below the site. My contributions were accepted happily and carried up to the nest, much to my delight. Some days later, a sneaky peek with the telescopic lens of a pocket camera revealed 4 eggs nestled amongst moss and feathers plucked from her own body. 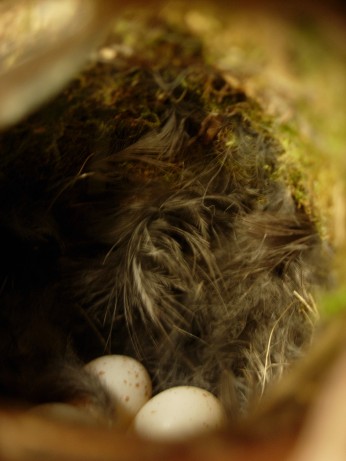 the inside of the nest lined with moss and feathers

In more natural situations the wren’s nest is quite an elaborate, dome shaped construction, often placed against a wall or as in the one below, against a rock face and amongst vegetation (photographed in Gibraltar). 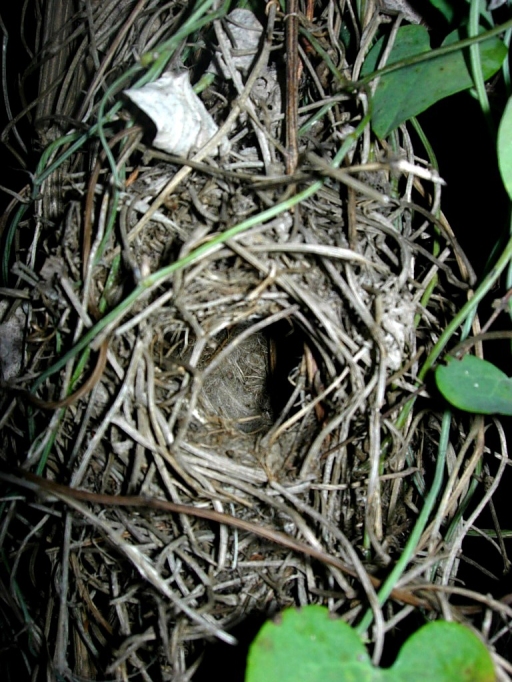 Another wren’s nest I found on the ground when out walking around the area local to our home in Spain had been constructed using a lot of leaves and moss, dried grasses and lengths of paper material. I would have loved to see the little bird carrying that and working it in. The photograph is of the back of the nest which is flat from having been built against a wall. 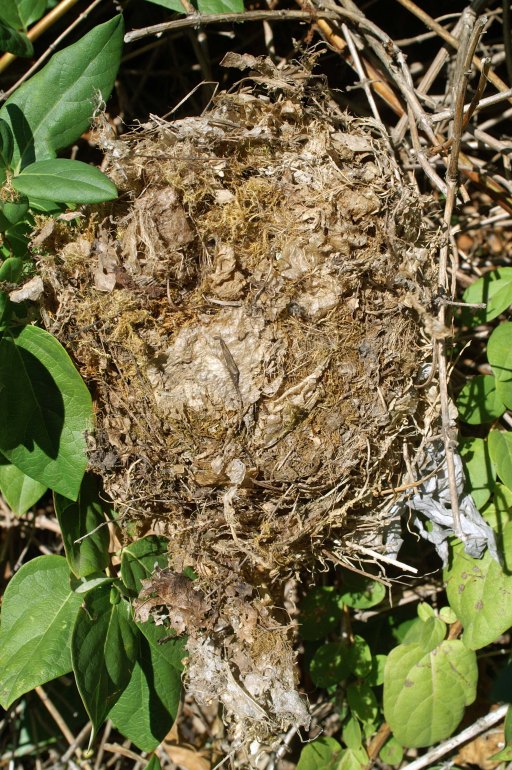 Blue Tits are naturally cavity-nesting birds, but they liked our light fittings too and several years we had a family in a particular one, again very close to the house, but this time under the covered front terrace. Their nest was a much lighter affair than the wren’s, perhaps partly because its position got a lot more sun, but it was still cosy inside, lined with fine grass, moss, feathers and quite amusingly, some of the long dark hairs from our Yorkshire Terrier (we used to brush him and clip his hair outside). I couldn’t see into the nest without the aid of my little camera’s telescopic lens, so couldn’t believe my lucky timing for this shot, taken as soon as I spotted the female exit for a few minutes. The three hatchlings were very recent and you can see fine cracks in two of the remaining eggs. 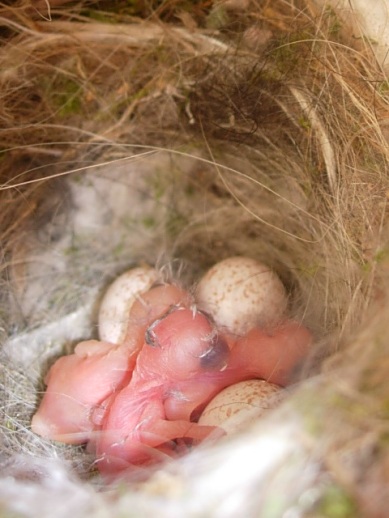 Inside the blue tit’s nest in a light fitting-Sotogrande, Spain

The next nest was built by a pair of Serin, tiny finches that are common in Spain. They built it high up in a very tall cypress fir tree and they too successfully raised a family in it. I found it on the ground beneath the tree long after they had left it and was amazed at how light and flimsy-looking it was, constructed mainly from fine grass and spent flower tassels dropped from  neighbouring cork oak trees. At first I wasn’t sure who had built the nest as they and a pair of  Short-toed Treecreepers were nesting at the same time in trees next to each other, but then I spotted the white feather in the lining and remembered spotting and photographing the female Serin with it in her beak, months before. 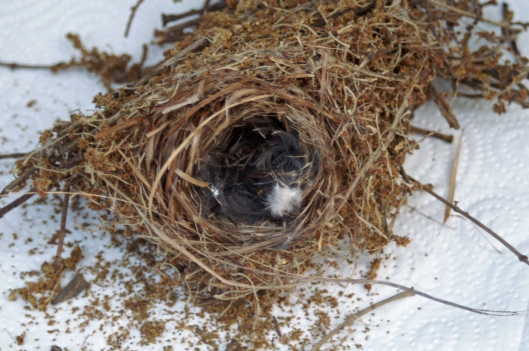 The nest of a pair of tiny Serin blown down from a tree, Sotogrande, Spain

I’ve put in a couple of pictures of Serin here, to show what I’m talking about and because I like them a lot (the birds that is). 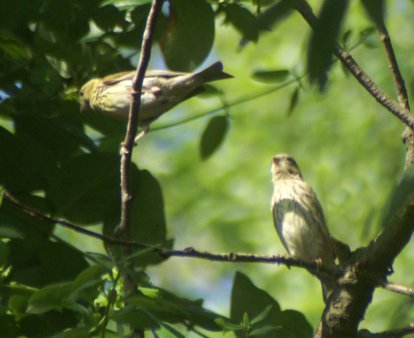 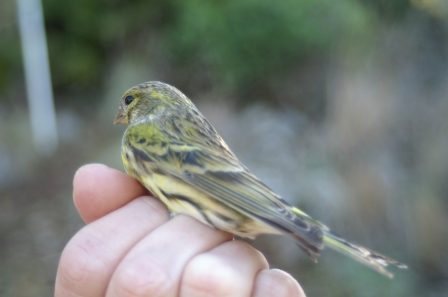 The final picture for this post is a British Robin’s nest, built in the wood pile of my friend’s house in Nevern, Pembrokeshire. It was not very far off the ground as you can see, but was so well camouflaged we walked past it for a couple of days before noticing it. 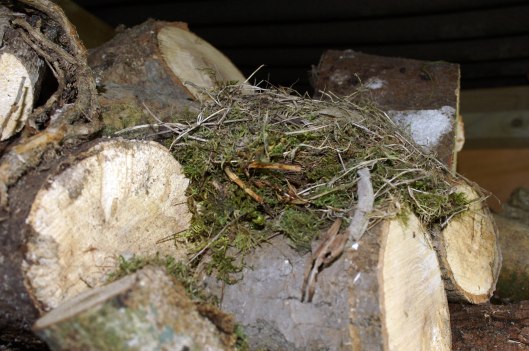 8 thoughts on “The craft and artistry of nest building”