Height: medium, up to 1m; flowers: brush-like, purple, rayed or not, the bracts are pale brown with blackish-brown appendages; stem: stiff & downy, markedly swollen beneath the flowerhead; leaves: alternate, oblong.

Height: tall, up to 1.5m flowers: umbel-like clusters of flower heads, each 1-2cm across & consisting of yellow disc florets and pink/lilac ray florets; leaves: trifloiate, in opposite pairs up the stem

Where to see it: Bryn Euryn; Bryn Pydew; 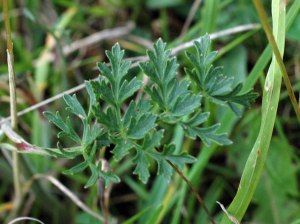 The latest of the three common umbellifers to flower.

Flowers may be white or pink

height: medium, to 60cm; flowers: purplish-pink, petals blunt, stamens protruding; 4-6mm; few to the head, with very long papery bracts, with or without bulbils, or bulbils only. leaves: keeled

Where to see it: Bryn Euryn

I spotted this plant for the first time a few summers ago when I came across just one patch of it growing amongst the long grass of the open meadow area of Bryn Euryn, but now it has spread and is establishing in several other spots too. 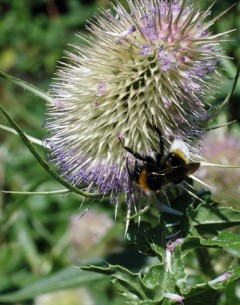 height: tall, to 2m; flowers: pinkish purple, in egg-shaped heads 6-8cm long, with numerous spiny bracts; on tall stems leaves: spine-covered appearing as rosettes in the plant’s first year; in the second year these die back and stems are opposite and joined at the base, the resulting cup collecting water

Where to see it: Bryn Euryn