Pwllycrochan Wood forms part of the glorious treeline that stretches across the steep hillside slopes creating the beautiful and seasonally-changing backdrop to the town of Colwyn Bay.

The remnant of a once much greater area of ancient woodland, the woodland is long and narrow. It covers just 21 hectares of land and is divided into three parts by roads that bound it and cut through it; the Old Highway, King’s Drive and Pen y Bryn road. Now under the care of Conwy Borough Council, the woodland is managed as a Local Nature Reserve. There are several marked trails that are easily followed. Some are slightly steep in places but there’s nothing too taxing if you’re fairly fit. None of the trails are suitable for wheelchairs or buggies.

The main access to the wood is up a few steps from the Old Highway, located opposite the top of Pwllycrochan Avenue where it is possible to park a car.

One of the boundary roads of the ‘islands’ of woodland, the Old Highwayreally is an old highway, documents dating back to the 17th century refer to a road passing through the area, which this is said to be. It looks as though it may have been the original road from Abergele to Conwy. 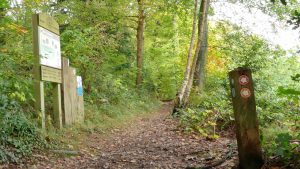 At the top of the steps to the right is an interpretation board with a rather faded map of the woodland showing five colour-coded circular Trails around it. Being a serial meanderer I don’t tend to follow the marked Trails end to end, preferring to follow my eyes and ears, changing direction  and stopping often to look at anything that takes my interest, but you might find it helpful if you want to take a more focussed or energetic walk.

Most of the wood is recognised as ancient woodland, which means it has to have existed continuously since the year 1600, and that at least 11 ancient woodland indicator species can be found within it. The dominant tree species, of which there are some spectacularly tall specimens include native Ash, Oak and Beech with some Scots Pine Wych Elm, Hazel, Holly and Yew. Then there are the non-native Sycamore, Horse Chestnut and Sweet Chestnut. 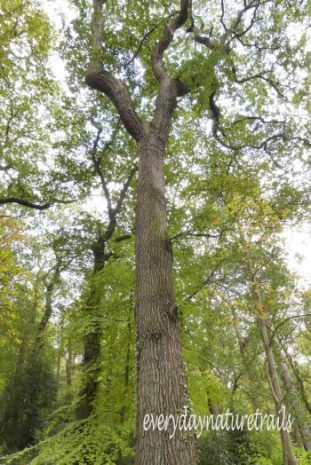 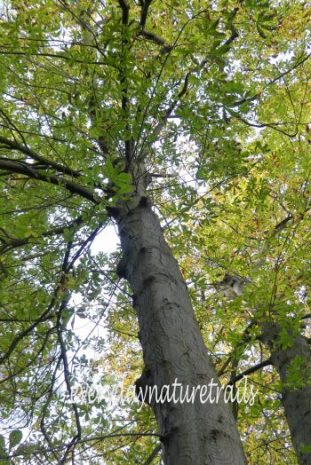 The ground flora is made up mainly of bramble, ivy, honeysuckle and dog’s mercury.

As part of the once-extensive Pwllycrochan Estate, it is likely that a team of woodsmen would have worked full time to manage the woodland. Back in their day they would have planted and maintained the trees and they would have planted shrubs amongst the trees to enhance the habitat for game birds, providing cover for their ground nests in the Spring and fruits to feed on in the Winter. I’m sure they would be proud to see that their legacy lives on through the amazing ancient trees that tower overhead and line the woodland paths. 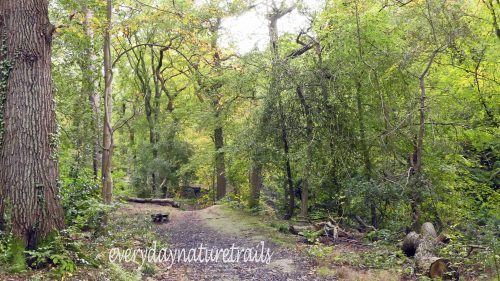 It is a popular place to take a walk and there are times when the woods get ‘busy’, particularly at weekends. In a clearing doubtless caused mainly by the presence of a magnificent spreading Beech tree, felled tree trunks have been shaped as benches and set in a horse-shoe shape, useful as seating for an outdoor classroom or picnic area or just a sit down in a peaceful place.

In the older part of the woodland the sound of fast-flowing and falling water brings pleasant background sounds to a walk, particularly noticeable after a period of rainfall. Two streams tumble down deep, steep-sided dingles where ferns relish the damp shade. Their courses aren’t entirely natural as they have been diverted under roads and this one directed down a stone-built stepped weir, runs into the pool from which the woodland takes its name.

The Welsh name of “Pwllycrochan” is thought to translate to mean ‘Cauldron Pool’. Years ago the stream probably ran much faster than it does now and would have fed the pool it created with well oxygenated water that bubbled up from its base, giving the effect of a boiling cauldron. Now the water flowing in isn’t powerful enough to create that effect, even after sustained rain and the flowing water makes a rather disappointing exit through drainpipes sticking out from beneath the bridge. 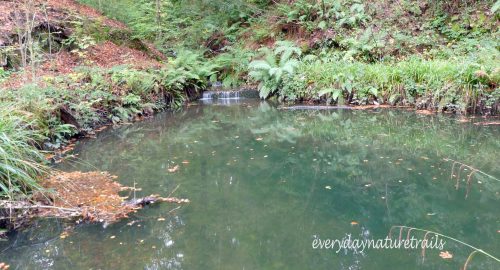