When to see them: July to November. New adults may be found from July onwards and they can survive until late in the autumn.

This is an attractive large bronze-brown shieldbug that has dark orange-red legs and slightly hooked projections at the front of the pronuptum. There is a pale spot at the tip of the scutellum that varies from orange to cream.

This species overwinters as young larvae, feeding mainly on Oak, Alder, Hazel and other deciduous trees. Adults are partially predatory and feed on caterpillars and other insects as well as on fruits. Eggs are laid in August. Adult Forest bugs can sometimes be found in the early Spring, which suggests that a secondary breeding cycle may be possible. 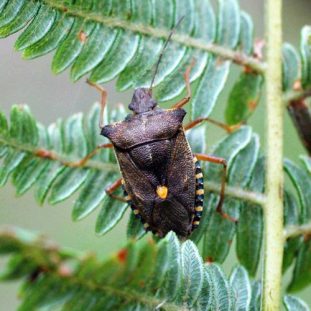 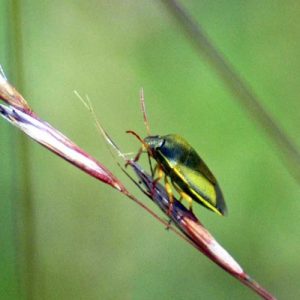 Habitat: Various habitats where Gorse & other plants in the Genisteae family such as Broom are present.

When to see them: As aduts – all year round.

Similar species May be confused with the Green Shieldbug; the habitat is usually diagnostic as are the red antennae of the Gorse Shieldbug.

A large Shieldbug with two adult colour forms that relate to sexual maturity. Those emerging and mating in the Spring are predominantly green; the new generation appearing in the late Summer have purple-red markings on the pronotum and corium. Individuals often become darker prior to hibernation. 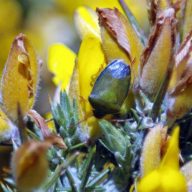 Life History: Although often associated with gorse, larvae also feed on broom, weld and other plants in the genistaceae family.