Description: Its large size (13 mm) and cruciform white markings make it easy to identify, although the abdomen colour can vary from yellow through red-brown to almost black. The males are usually slimmer than the females.

LIfe history:This spider is mature from summer to autumn and is usually at its largest in late autumn when it is at its oldest and often full of eggs.

After laying their eggs the females die and only the eggs and the spiders that hatched in the spring of the year will overwinter.

Habitat: It is widespread in gardens, woodland and meadows.

When to see it: It is particularly noticeable in late summer to autumn when numbers peak and the large orb webs can be highlighted by dew. 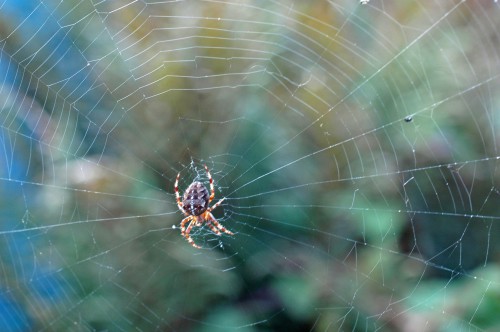 Garden Spider in centre of its orb web

There are two common Araniella species; A. cucurbitina and A. opistographa. They are hard to tell apart in the field and are often found together, so this one that I discovered on Bryn Euryn may be either. (Although A. curcubitina is more frequently found in Wales.)

Females grow up to 8 mm, males only up to 5 mm. They are attractive little spiders; pale bright yellowish green in colour and have a red mark under the abdomen. 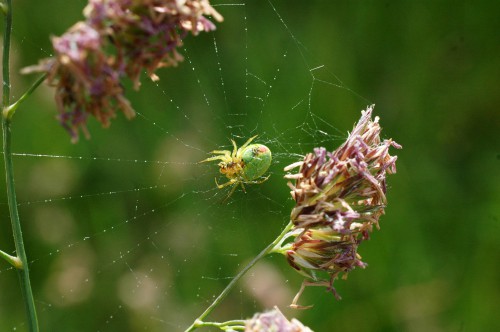 Habitat: The spiders are found in a wide variety of situations, but most commonly on trees (particularly oaks) and bushes in woodland, scrub and hedgerows, as well as on nearby low vegetation.

Status: The species A. Opistographa is widespread in much of southern England from Yorkshire southwards, but it is much more scattered in the west and north as far as central Scotland. It is more sparsely distributed in Wales, Scotland and south-west England than A. curcurbitina.