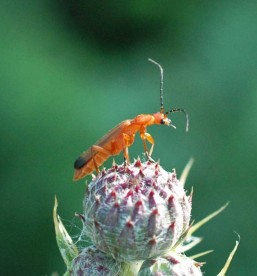 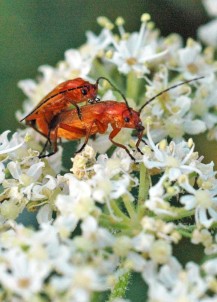 Family: Cantharidae Size: Body length 12-16mm Description: Head and thorax rust-red, elytra shading to a dark base, females are larger than the males When to see them: Adults are seen mostly during July & August Habitat: Often seen on umbellifer flowers such as hogweed & cow parsley, but turn up wherever there is suitable prey, nectar or pollen Food: Small insects & other invertebrates, also eat nectar & pollen.

Behaviour: The beetles make short flights between plants and may also be seen flying amongst long grass.

They move quickly over flowerheads and leaves of plants hunting for small insect prey such as aphids. They are frequently noticed as mating pairs.

Slender and often rather downy, these beetles have the ability to spring into the air and right themselves if they fall onto their backs. They do not always land the right way up but they go on leaping until they do. the action is accompanied by a loud ‘click’, from which they take their name. 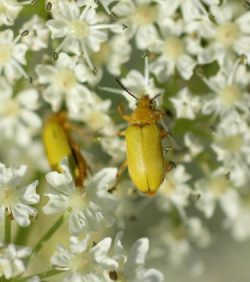 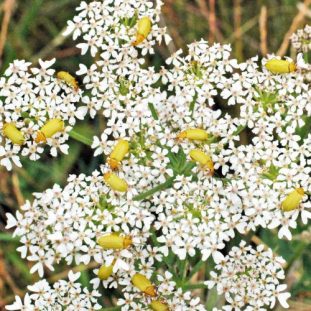 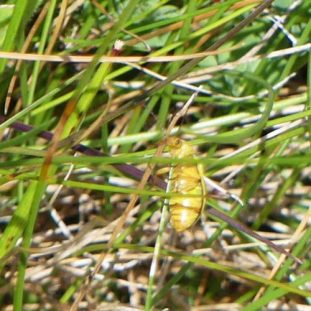 Sulphur beetles are small, but they are relatively easy to spot with their yellow colouring contrasting with the flowers of their favourite umbellifer flowers. These attractive little beetles live on the flowerheads of plants such as Wild Carrot and Wild Thyme, feeding on the nectar and pollen, and are often locally abundant.

The larvae are rarely seen: they feed on the ground on decaying wood and plant material.

Family: Oedemeridae Size: Body length 8-10mm When to see them: April to September. Habitat:Flower meadows, gardens and waste ground where they visit flowers. Feeds on: Pollen of various flowers Distribution: Widespread from southern England northwards to the Wash and north Wales, but less common further north than that.

Quick identification: The green elytra are pointed and gape apart. The male and female of this beetle can easily be told apart, as the male has large green bulges on its thighs, while the female does not.

The male is unmistakeable but the female could be confused with other Oedemera species, however its size, gaping wing cases and irredescence distinguish it. 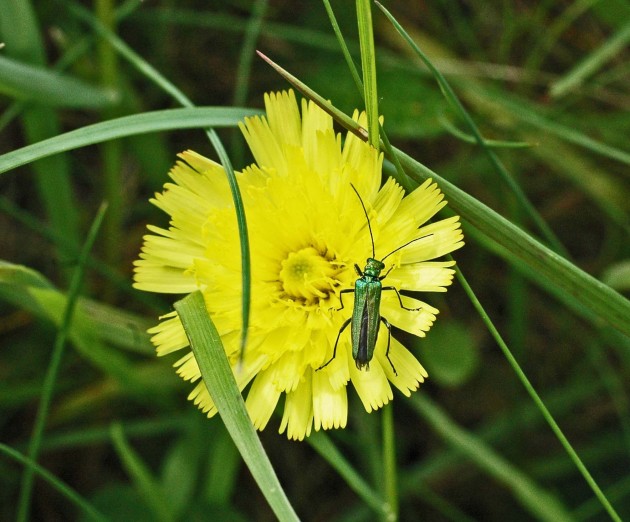 Most of the beetles in this huge family are smooth and shiny, with rounded outlines. Many are brightly coloured. The tarsi have 5 segments, but the 4th segment is tiny and more or less hidden in the enlarged 3rd segment. This feature should distinguish the leaf beetle from the ladybirds and all other superficially similar beetles. Almost all adults and larvae eat leaves and many species are serious agricultural and horticultural pests. The larvae are soft and slug-like and move very slowly on short legs. There are over 250 British species.

Family: Chrysomelidae Size: Body length 5mm When to see them: May to August Habitat: Grassy places, where the beetles commonly sit on the flowers of hawkweeds & other yellow compositae Feeds on: Pollen of various flowers Distribution: Widespread from southern England northwards to the Wash and north Wales, but less common further north than that.

I haven’t come across a common name for this beautiful little beetle. The generic name ‘Cryptocephalus‘ refers to the fact that the head of this extremely shiny emerald green beetle & its relatives is completely hidden under the pronotum.

The ladybirds are among the most familiar and best-liked of the beetles, perhaps because of their bright colours and their aphid-eating habits of most species, although not all are predatory.

The most common ladybird in the UK

The adult is less variable than most other ladybirds and the black spots rarely fuse together, although their size may vary a good deal. It is one of our commonest ladybirds, found in most habitats.

The larvae are blue/grey in colour, resembling those of many other ladybirds; they feed on aphids.

A distinctive but variable ladybird coloured black and yellow.

Adults: Yellow with variable black markings; the suture between the elytra is always black.

Status: Common in the South of Britain.

May be found on shrubs and trees in gardens

Most of these beetles have fairly slender bodies and very long antennae, those of the males often being longer than their bodies.

This beetle superficially resembles the Wasp beetle, but has much more yellow on the elytra .

Seen from May to August and most often seen on flowers in hedgerows and along woodland margins. The larvae develop in a wide range of timber.

2 thoughts on “Beetles found on flowers”