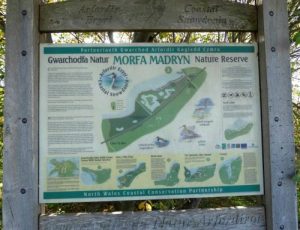 I had never been into the Morfa Madryn Reserve before, so I thought I’d take a quick look around it while I was here.

As are most bird reserves, this one is furnished with hides, three in fact, that will have been carefully placed to maximise views of particular aspects of the reserve.

13:34- I came upon the first of the three hides, opened the door cautiously and ventured inside. This was partly to see if there was anything to see from there that I couldn’t see from outside and partly to have somewhere to sit for a few minutes out of the cold wind.

I have to say that I’m not a fan of bird hides for several reasons: 1) If I’m alone I dread opening the door in case there’s people in there watching something rare and I upset them by scaring it away. If I’m with someone I always get them to go in first. 2)  If there are other people in there I never know whether to speak or not. 3) I’m not good at sitting still for long periods of time, especially on hard wooden benches. 4) I worry about opening up hatches in case they either break or I can’t do them up again. 5) I confess that I get bored looking at the same view for ages, especially if I’m supposed to be waiting for something to put in a rare appearance that may only last for seconds. 6) I rarely have binoculars with me, so feel like a fraud and can’t really see if there’s anything there to watch unless someone kindly points it out to me. 7) I think about what I might be missing outside.

All that said, this hide was empty and it was definitely warmer in there. I decided to stay for a while. I lifted up one of the heavy extra-wide, slightly warped hatches, worked out how to keep it up and sat down to look out. I quickly realised there was a lot more than bird activity to sit and gaze at, got out my notebook and wrote:

“The tide’s way out so not much to see in the way of birds, but the views across the sands are spectacular: it’s rare to get such clear views of the Anglesey coast.

I’m on the other side of the slate boundary fence now and think what a work of art it is. Each post will have been cut to size, probably by hand as each one is different from its neighbour. It must have been hard work putting it up too, but that now it’s there it will probably last for ever with far greater resistance to the elements than this wooden hide that’s already showing signs of wear and tear. It’s weakness is doubtless the metal wire it’s linked with. 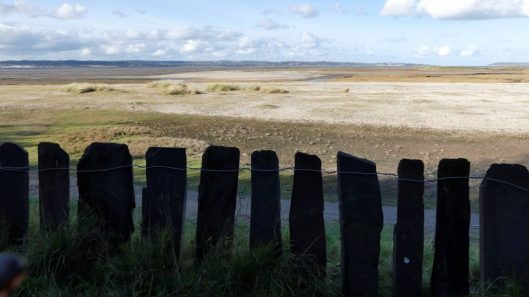 Slate pillar fences became common in north-west Wales from the middle of the 19th century. In 1861, the Penryhn Quarry at Bethesda, Gwynedd – one of the largest slate quarries in the world at that time – produced around 9,000 individual pillars. These pillars consisted of poor quality blue slate, typically about 150cm (4.9 feet) tall.
They were used to mark fields, gardens, railways lines and roads, with their simple construction being particularly well-suited to the harsh weather experienced by upland areas.

It’s warmer in here and peaceful too if I zone out the constant sound of traffic racing along the nearby A55. Harder to ignore the raucous racket being made by of a couple of Crows though. 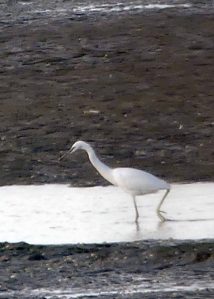 13:51- A Little Egret stalks back and forth in a shallow trench of a tidal pool. It takes a few slow graceful paces, pauses and delicately stirs up the muddy sand with one foot. It leans forward peering intently into the water, then strikes down rapidly with its beak.

I enjoyed that, it brought back warm and fuzzy memories of time spent watching them on the little Reserva close to where I lived in Spain.

A helicopter flies very low overhead making a tremendous noise but the birds must be accustomed to it as none of them react at all.

13:56- I’m getting restless already and about to leave when I spot a swimming duck from the side window. It’s a Wigeon drake and he seems to be thoroughly enjoying a vigorous bathe and preen of his feathers. 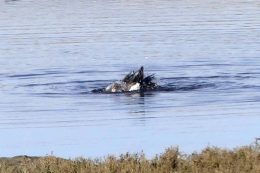 There’s a Redshank pecking around on the edge of the pool. The chunky Wigeon makes the Redshank look tiny and dainty.

I sit for a bit longer and watch a small flock of Redshank fly in. They are fidgety, taking off, flying around then returning almost immediately to the same spot several times before settling. Maybe they have to check out the health and safety aspects of the spot carefully as they seem to want a nap.

I take in the view across the Menai Strait to Puffin Island, in between there are so many shades and textures of shells, sand, mud, grass, rock and water the landscape looks almost other-planetary. 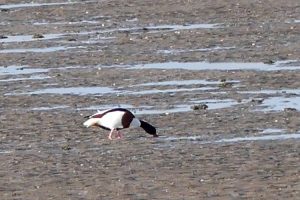 14:04- A pair of Shelduck come into view waddling across the sand. They have their heads down and look like they’re hoovering up what’s in front of them with their bills.

14:11 – The formerly noisy Crows come back for a quiet shellfish lunch.

14:12- Sheep have wandered into view, heads down intent on grazing, which is exactly the job they are here to do; keeping down the grass and helping to clear scrub from bird nesting sites.

I stand up to leave, having a quick look through the rather dirty window on the other side of the hide before I do. There’s quite a large pool here but I can’t see it properly as it’s hidden behind reeds. I did see a dragonfly though. I’m surprised to see it this late in the year. I tried opening the window as it was too dirty to see through properly, but one of its hinges was broken, (see back to reason 6 of why I don’t like hides!), I tried to close it back properly but it was too heavy; sorry, hope it’s still there. I take a snap of the manufacturers details on the door just in case, but I suspect the guarantee is up now….

14:21 The Reserve is well vegetated and the height of the shrubbery either side of the paths is quite disorientating and feels a bit like a maze. I didn’t see even a single small bird in there today, but I’m sure there’s enough of a mix here to suit a variety of species. A train passing, this time coming from the Holyhead direction, makes me aware how close the train tracks are.

The busy A55 is also only a small field’s width away too.

The far end of the Reserve is open and has a seat but I couldn’t quite work out why it was placed at the angle it is; it doesn’t directly face either the view overlooking the saltmarsh and Menai Strait or the mountains and there’s a young tree growing up in front of it too. 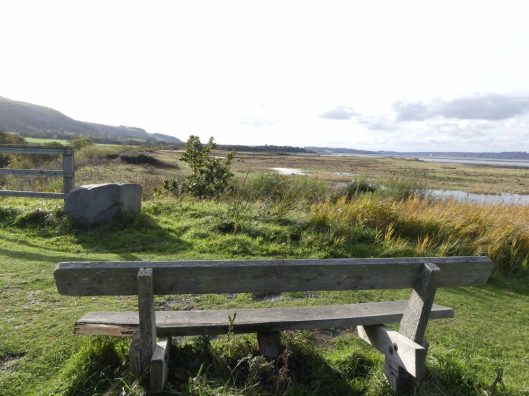 I may have placed it to face this way….. Not that it mattered really as it was too cold for sitting around.

14:35- I’d left the reserve and came upon this lovely little party of Wigeon swimming about in a pool of water. You can see it was windy by the ripples on the water.

I noticed that the birds were all facing into the wind, I wonder if that made them more aerodynamic to stop them being buffeted about, or perhaps they had only just flown in and landed. Another Redshank stood nearby watching them.

They soon broke out of their orderly arrangement on the water and began free swimming in all directions. I noticed from the photograph that two of them are looking upwards; perhaps checking for aerial predators. 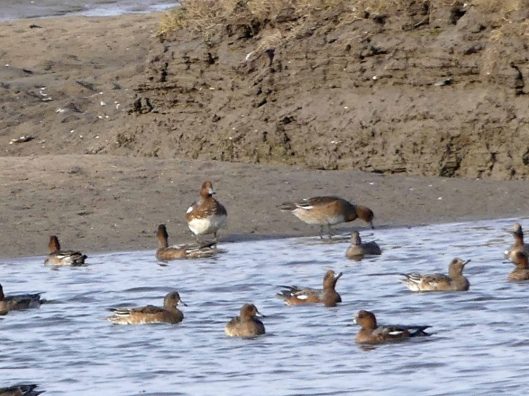 This little group of three may (or may not!) be a family. There’s an adult drake with his more patterned back plumage and chestnut head with the lighter stripe and a plainer chocolate brown duck, so I think the one with the white underbelly and brown upper parts must be a juvenile.

I dither about what to do now, should I carry on along the Coast Path for a while or start heading back? I opted to walk on a short way, then stopped, admired the view, saw how long and open the path going forward was, realised the light was already beginning to fade, that it was getting noticeably colder and turned round to walk back.

The Spit or Shell Island

The beach area here in front of the reserve is the Spit, or Shell Island and it’s clear where it got its more attractive name from. 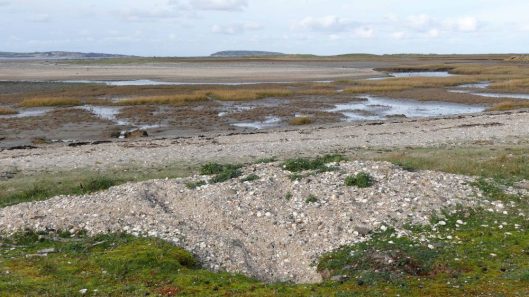 It literally is a stretch composed almost entirely of empty seashells.

In my previous post, which covers the first part of this walk, you may recall the notice that requests that you stay off this area from March-September to avoid disturbing nesting birds and also at high tide from October-February so as not to disturb roosting birds. 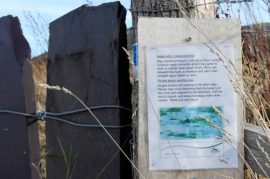 A further notice here advises that Ringed Plovers nest on the shell ridge till the end of August, so please stick to the Coast path that follows the line of the fence, and once again keep dogs under control. This is one of many instances along the Coast Path route where there is a conflict of interest between people and nature.  Of course walkers want to be as close as possible to the coast, but unfortunately don’t always respect that this is first and foremost a wild habitat that they have the privilege of passing through.

There’s a mix of shells here, cockles, mussels and clams to name a few. Most are broken or crushed, but some remain intact. Beyond the high tide line at the back of the beach there are small plants, mostly moss, which is often one of the first plants to establish on rocky land: they can break down rock and soil to create a more hospitable environment for other plants and absorb moisture so act as sponges, soaking up rainfall and helping prevent erosion of the landscapes. I noticed a lot of rabbit pellets scattered around too, adding fertiliser and fibre. I was pleased to spot this tiny storksbill plant in flower. I’m not certain of the species but I’m hoping it was Sticky Storksbill-Erodium lebelli. (Storksbills are notoriously tricky to identify with certainty).

A last view from here over Traeth Lafan sands to Puffin Island and Anglesey and I set off to walk back.