The early morning was sunny and bright. Perfect for my first walk in the woods of this new year, I thought. Ha! I hadn’t got far when I realised it may not be quite as perfect as I had anticipated. By the time I got outside at around midday the sun had disappeared behind a thick veil of misty cloud, I felt cold despite thermal layers, my new three-way all-weather jacket and walking boots. The track was muddy and a bit slippery; thankfully for once I’d remembered to pick up my pointy-ended light-weight walking stick. This wasn’t what I’d hoped for, but as I want to try to follow the progress of the seasons more closely this year it had to be done. I reminded myself of my double-negatively phrased mantra, “there’s never nothing to see”, crossed my already frozen fingers and trusted that would work. 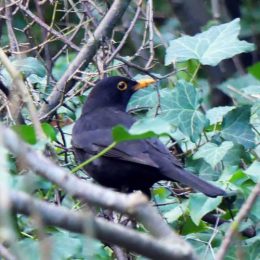 11:43 – Watching a handsome male blackbird rootling in the ground-covering ivy was a good start; then a grey squirrel with a scruffy sparsely-furred tail made me wonder what it takes to keep them in? It was freezing cold, damp and now getting windy, perfect conditions for a spot of hibernation I’d have thought; they must be too hungry to sleep.

I do love to see the sky through the tracery of bare branches and twigs on days like this when they are almost in monochrome.

Holly has a strong presence year-round, but it struck me today that even on dull days it shines out, seeming to catch any available light touching its leaves and reflecting it back. There were a few berries remaining on this plant but I’m sure they won’t be there for long.

Clumps of bright green leaves of Alexanders started to reappear back in December. Here on the edge of the woodland path they are sheltered by the trees and protected by leaf litter. I’m always surprised it doesn’t get eaten. It was introduced into this country by the Romans; having a delicate celery-like taste, they  used it as a culinary herb. Rarely growing more than about four miles from the sea, here it’s at its most prolific on the lower level of the Little Orme and along the Llandudno Road. It’s spreading quite quickly here in this part of the woods too. I wonder how it got here originally?

11:57 – The view from the boundary fence was obscured by the dense misty cloud which seemed to be approaching fast. I could still see part of the River Conwy, but the Carneddau mountains beyond had all but disappeared. The A55, or the North Wales Expressway as it is officially known, is busy with traffic whatever the day. The main route westward and up through Anglesey to the Irish ferry port at Holyhead, it is also heavily used by locals for short commutes and  holidaymakers and tourists all year round. The railway line runs alongside it too. Running along the valley bottom, vehicle noise is amplified and rises up to become the background sound to my walks, even the mist hardly muffles it. It is so continuous though that your mind soon ceases to register it.

The Scots Pines are at their most numerous in this spot. On the woodland boundary and exposed to strong west winds their trunks are angled backwards and branches are contorted and twisted into some weird and wonderful shapes.

A sprinkling of golden gorse flowers brightened the greyness of the day and a quick inhale of its gorgeous coconut fragrance gave me a boost and the will to continue!

It’s less sheltered up on the Woodland Trail, which is for the most part a corridor through the trees, so deciding which way to go was easy; a right turn and then up, back into the closer shelter of trees. I passed by the big holly tree, hardly any berries remained and there were no birds to see there. There are good crops of ivy berries this year, but they seem to be ripening sporadically and slowly. I often come across plants throughout the woods that have escaped from gardens. I hadn’t spotted this mahonia before though – it’s preparing to flower which will no doubt be gratefully received by the red & the buff-tailed bumblebee queens when they emerge in a few short weeks time.

12:11 – It started to rain heavily. I was fairly protected by the trees so decided to carry on. A party of Long-tailed tits flew above me, calling to one another as they moved quickly through the high tree branches. Tiny birds, they clearly have to keep searching for food but surely need to keep warm and dry too; not easy when there are no leaves. 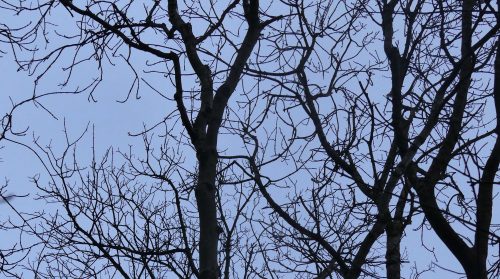 The wind picked up. On the north side of the hill and gradually getting higher, it was noticeably colder too. If I had sense I’d probably have gone home now, but I really wanted to get to the top of the hill today. At least this weather suits blackbirds foraging in deep leaf litter. 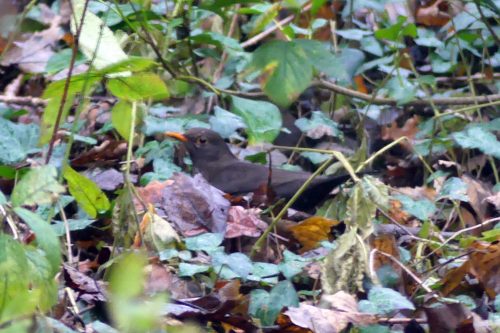 I passed the ‘fernery’ – the open slope that is lushly covered with predominantly Hart’s Tongue fern growing between moss-covered stones. If it was warmer it may feel quite tropical. The smudges are raindrops on the camera lens! 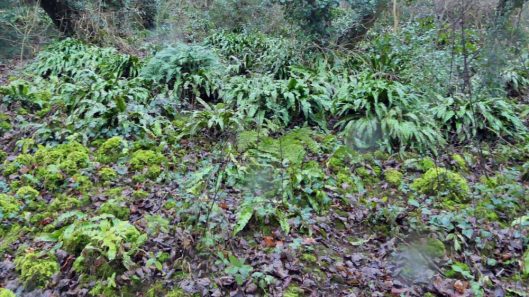 I was glad to reach the part of the trail I think of as the ‘Dark Wood’. It is sheltered by the rising bulk of the hillside and some tall old trees, including a good few Yews, which all combine to block out the sunlight and today some of the rain. 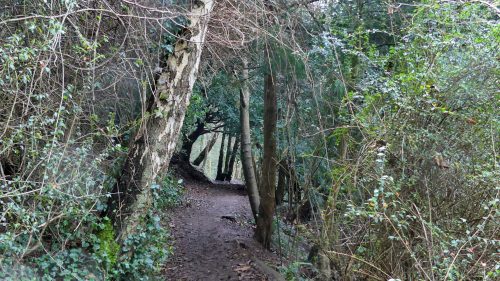 At the end of the tree tunnel is a particularly large evergreen tree, one of several that I know throughout the woodland. I’m trying to work out what they are, so any ideas would be gratefully received. 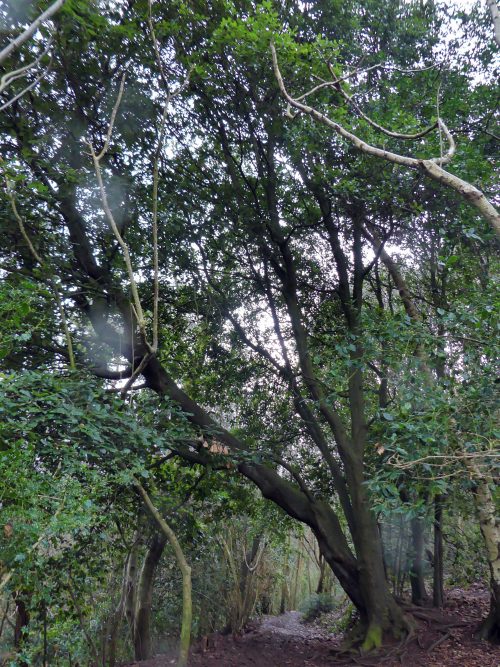 For some reason I can’t begin to guess at, an iron gate stands at the side of the track just past here. There’s no sign of any fencing on either side of it. It’s just a gate to nowhere. 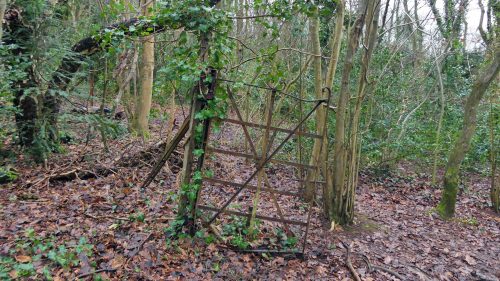 It does stand near to the junction of a track leading up to the summit though, making it easier to remember where its start is. Covered with leaves it doesn’t stand out and is easy to miss. 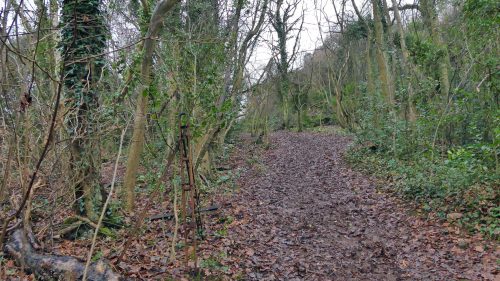 12:26 – The upward track was muddy and slippery and I was glad I had my spiky walking stick, otherwise progress could easily have been a painful step forward and a slide back. It was still raining, my fingers were freezing and I was the only person trekking to the top. Can’t think why. The flash of a colourful Bullfinch disturbed from a bramble patch, eating what remains of blackberries really brightened my day. He disappeared into the scrub of hazel and blackthorn. Hazel catkins start growing at the end of the summer or early autumn and are making steady progress; these are the male flowers, the tiny red female flowers will appear a little later on when the male flowers are fully mature. 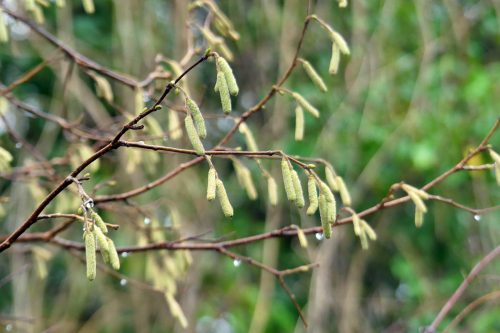 The twiggy branches of the blackthorns are well-covered with lichen, including clumps of the beautiful silver-green ferny one that feels velvety to the touch. It is a lichen, but confusingly called Oak Moss.

12:42 – Emerging onto the hill top was breathtaking. Quite literally – it was raining hard, blowing a hooley and bitingly cold. I took a couple of snaps while the wind tried to wrench the camera out of my hands and the rain obscured the view further by dropping onto the lens. There was no way I was going to carry on up to the summit proper. 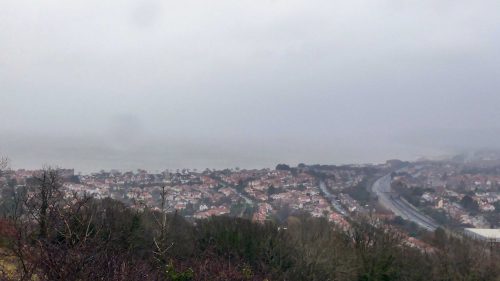 The sea is out there somewhere

12:50 – I turned and scurried back to the comparative shelter of the track, stopping only because I couldn’t resist this gnarly tree trunk decorated with moss and lichen.

Then there was an extremely tall tree painted with both orange and green lichens and daubed with cushion-like moss. I couldn’t resist that either.

I spot a small Elder that already has quite well-grown new leaves.

13:04 – I watched a blackbird that was having great success finding worms in the mud. I watched it pull out and eat two or three.

It had finally stopped raining and the sun was shining through the trees. It was still really cold though and although only early afternoon, gloomy and dark.

I took a slightly different route back to where I started as it’s a higher, less well used and still covered with leaves and much less slippery. It also cuts across the slope that is part of the view from my kitchen window and is a good place to be to see some of the birds that descend from here down to our bird feeders. No birds today, but I did realise that two of the trees up here are big old Sweet Chestnuts. They have beautifully coloured and textured bark.

13:22 – One last splash of colour – rust-red leaves remaining on a small tree, I’m assuming Copper beech that has found its way here from someone’s garden. 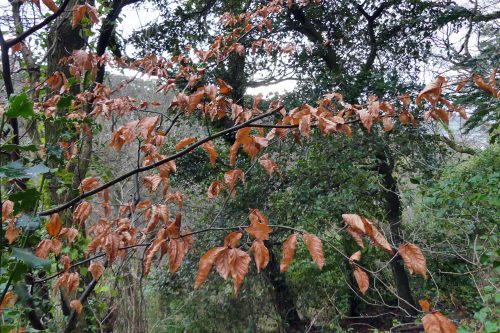 13:39 – I’m home, hands wrapped around a mug of  defrosting tea, watching some of the birds I didn’t see whilst out. They’d doubtless think it bonkers to go out on a day like this when you really don’t have to.