15:00 – Walking towards Angel Bay, it was sunny and eye-squintingly bright but as always of late it felt cool as there was a strong wind blowing in off the sea. Heading for the cliff edge to see if there were any seals about, I was distracted by the sight of a Kestrel hovering almost motionlessly at the edge of the cliff peering intently down. I have had some of my best views of these charismatic little falcons here on the Little Orme, but it’s not every day that you’re graced with such a close presence of one that was clearly totally absorbed in hunting mode and seemingly oblivious to the small audience gathered beneath it.

As I got closer the bird swooped away to land on the rocky cliff to the right of the bay.  I tried to get some shots of the landed Kestrel, failing to get the images I’d have liked as I was distracted by a lady asking if I would use my zoom lens to check out the details of a far distant ship! If only I was better at saying no! I did see that the bird had a chestnut head though, which is the colouration of females of the species; males have a blueish-grey head.

Fortunately it didn’t fly far away, just headed for the other side of the bay, now mostly in shade. It suddenly looked small and fragile against the bulk of the cliff, but despite being buffeted by the strong wind it held its position, hardly moving.

Another brief landing then it rose again into the air, hovering in front of us at not much more than eye-level. Perfectly beautiful and an amazing opportunity to see the bird from all angles. 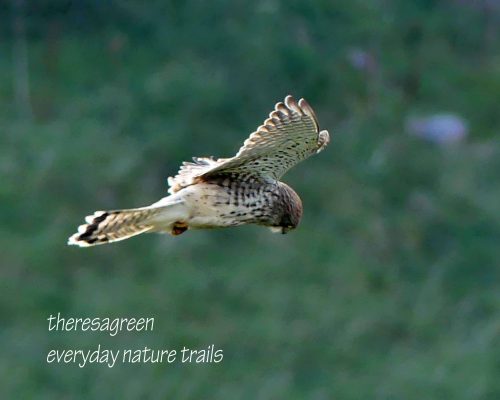 The bird dropped down slightly, showing off the lovely rich chestnut-brown plumage of its back. A similar shade beginning to colour its tail feathers further confirmed this was a female, a young one I think. Young males also have a chestnut head but grey tails and adult males then have both a grey head and tail. Females are slightly larger than males. 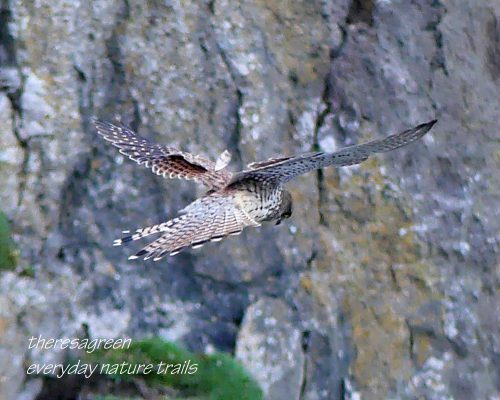 The next image is not sharply focussed but I love the way the bird is looking back over her shoulder as if to check if we were all still watching. 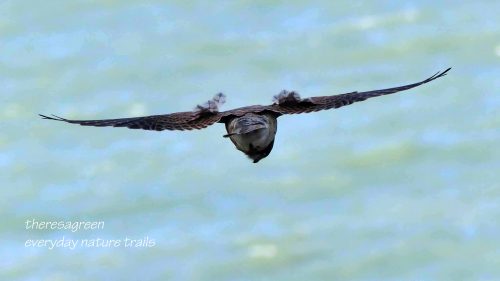 A hunting Kestrel typically flies along until it either spots prey or a spot where it is likely to find something. It pauses, then hovers with deeper wing-beats and tail fanned out and pointing downwards for stability; they always keep their head into the wind when hovering. For a few moments the bird remains perfectly motionless in mid-air except for the rapid vibration of its wings. It may then shift its position by a few metres and hovers again, intently scanning every centimetre of the ground below for the slightest movement that may give away the presence of a small rodent; little escapes its telescopic vision. Once prey is detected the bird drops down in stages before making a final pounce and grasping its target with its talons. 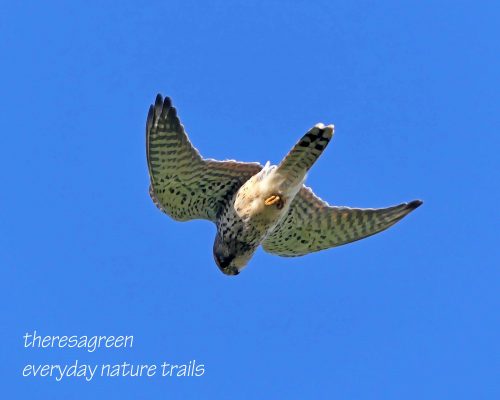 During the course of my watching the Kestrel was harassed several times by Jackdaws attempting to drive it away and even by a pair of larger Crows, but she was undeterred and held her position, barely flinching.

Apart from the Game Laws, no measure for the protection of wild birds in Britain existed before the year 1880. Prior to this date, gamekeepers and farmers were responsible for destroying all kinds of birds they suspected as being injurious in any way. Kestrels, along with Barn Owls and Tawny Owls, all of which would have been doing far more good than harm in their controlling of rodents, were accused of taking young Pheasants and therefore on the ‘hit list’ in areas where game birds were reared.

Even twenty years ago the sight of a Kestrel hovering over a motorway verge used to be a fairly common sight, but sadly not so much these days. Drops in Kestrel population figures caused concern in the late 1950s and 1960s when they were reduced to low numbers: changes in farming practices are believed to have been the primary cause. Their numbers have subsequently recovered somewhat and according to the British Trust for Ornithology(BTO), the Conservation Status of the Kestrel in Britain is now Amber and their breeding population is currently estimated at 45,000 breeding pairs. Across the rest of Europe numbers are greater and generally the Kestrel population is currently of ‘Least Concern’.

Kestrels are to some extent migratory. Other than during the breeding season they  move from one part of the country to another, and large numbers cross from our southern coasts to Europe and beyond during the winter to be replaced by others that come here from farther north. Despite being a protected species, Kestrels are as vulnerable as any other species of bird on migration that passes over countries still permitted to shoot certain wild birds. As recently as 2015, the hunting season in Malta was brought to an end three days early when a man shot dead a Kestrel.

Maybe the one I watched was here feeding up to make such a journey herself, in which case I wish her safe passage and a safe return next Spring.

13 thoughts on “The Windhover”