As August began I wanted to get out to see wildflowers. This is one of my favourite times of year for that, when there is every chance that there may be earlier flowering plants still around and the late-summer bloomers should be at or reaching their best. Most of the sites I visit regularly are good for wildflowers, but as they are mostly located on hills or headlands and exposed to the elements, they would not be particularly enjoyable on a strongly windy day like today and taking photographs would be difficult. I decided on Rhiwledyn Nature Reserve, one of my favourites as it covers a range of interesting habitats within its 12 acre site and as it is located on the eastern side of the Little Orme there was a chance that much of it would be sheltered from the worst of the wind.

There are three ways to access the reserve, all of which require a bit of an uphill hike. One route is from Llandudno, another from the other side of the Little Orme, but for me the most interesting route to its main entrance is along the path at the base of a section of the Orme that runs up Penrhyn Hill. Marked as a 10% gradient, this is a steepish stretch to walk, but worth the effort as the rock supports an array of plants, both wildflowers and some garden escapees, and is a nature trail in itself. This provides me with the perfect excuse to amble up the hill and take frequent excusable pauses for breath rather than stride purposefully along. 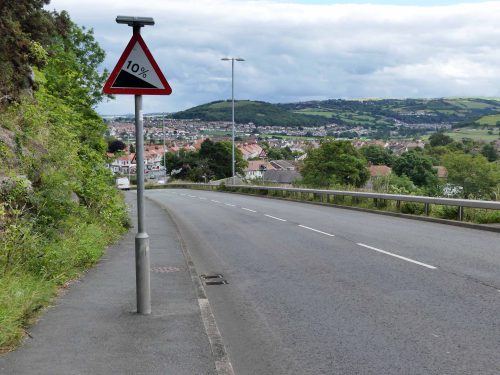 Looking back along Penrhyn Hill towards Penrhyn Bay. The hill in the centre background is Bryn Euryn

My first sighting was of a male Common blue butterfly taking a break from his battle with the wind on the flower of a hop trefoil, low down in the vegetation. Amongst long grass and ivy, a grey leaved Yellow-wort; this is an annual favouring short calcareous grassland but is found in a variety of spots throughout the headland. 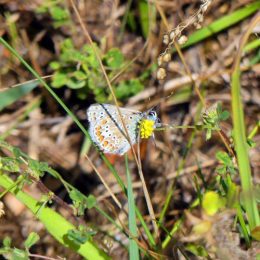 There were several clumps of a plant that was definitely a member of the mint family with strongly aromatic leaves. I don’t know what it is yet. 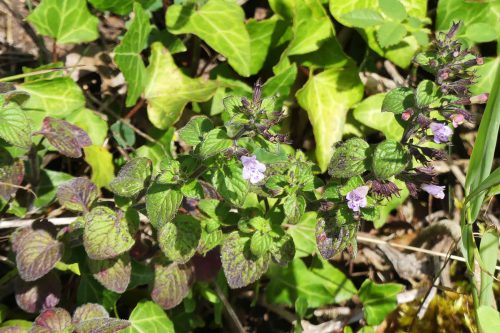 And another aromatic plant – Wild Fennel, growing as tall as me, in front of gorse.

A pretty snail clung to the leaf of a Valerian plant; I lifted it gently to check the colour of its underside lip – brown – then replaced it. A few bees were braving the breeze, mostly Buff-tailed bumblebees. I photographed one on marjoram, which may or may not be a wild plant. 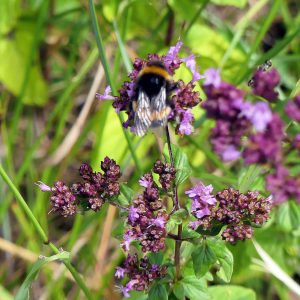 There is Wild Carrot in various stages of flowering from tight buds to maturing seedheads. Most often found in rough grassland, near the sea and again mostly on chalky soil. This is one of the easier of the white umbellifers to identify, with feathery leaves and bracts beneath the flowerheads and always a red flower in its centre. 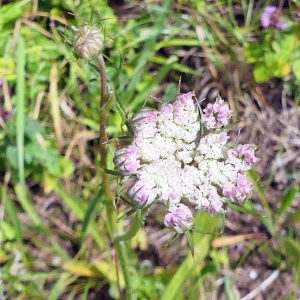 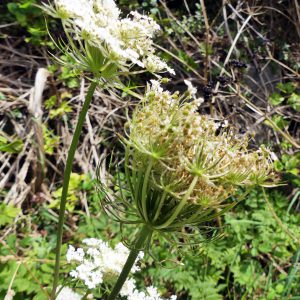 Windy days are not good for butterflies, but I did see a couple of Gatekeepers. Both sticking close within the vegetation, one found Marjoram to nectar on, the other attempted to bask on a Wild Clematis leaf. Both were faded and looking a little the worse for wear. 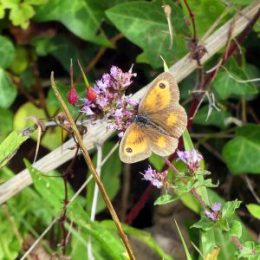 Gatekeeper on Marjoram- fruits of Herb Robert behind 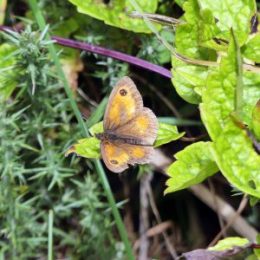 A flowering Goldenrod plant sprawled out across the edge of the path. 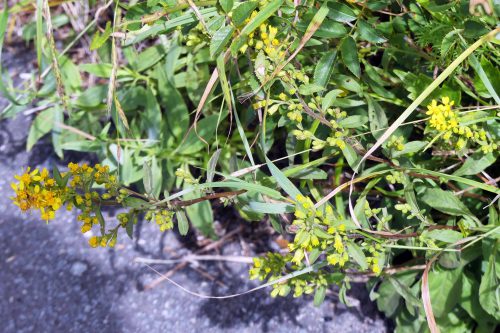 So too a sprawling patch of Montbretia 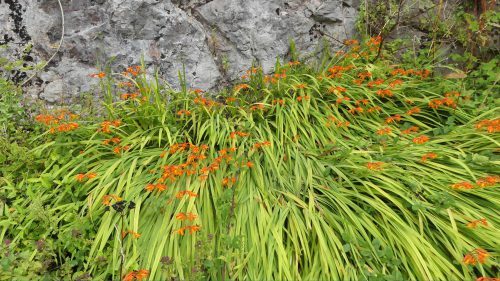 and this one with its flowers like small dandelions, which I think may be one of the Hawkweeds. Another one to work on. 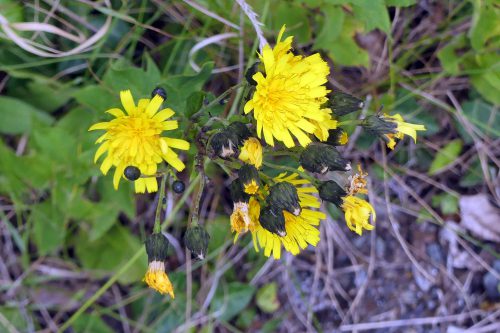 A stone wall marking the boundary of the farm’s land breaks the vegetated path edge, but behind it the small field is golden with Ragwort and long seeding grass. There were butterflies in there, mostly Whites, but it’s off-limits so couldn’t get a closer look. 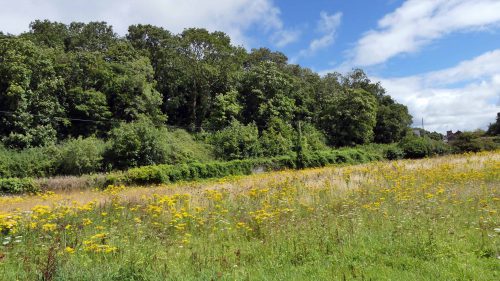 Trees on the edge of the small wood in the background of the photograph now cast shade over the path and its edge and there are less flowering plants. There is plenty of ivy, Wild Clematis a flourishing Wild Cabbage, more of the not yet id’d mint and a clump of the usually sun-seeking Rockrose.

Half an hour after parking my car I finally reach the entrance to the reserve. The sun is shining and a fly basks in the warmth reflected by the glass of the narrative board. 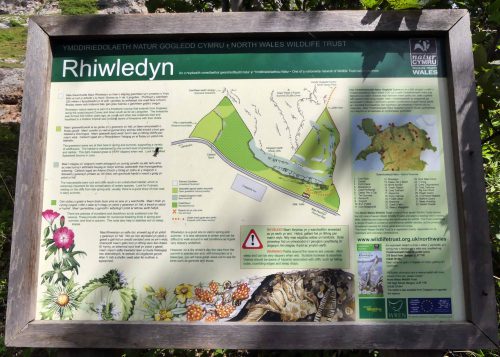 A pretty clump of Marjoram flowers at its base. 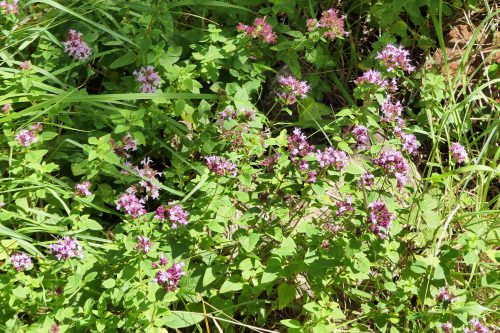 I turned left to first walk the short length of the path at the base of the headland where it meets Llandudno Bay. The strength of the wind here took my breath away and walking into it head on was a challenge, but now I’d got this far I wanted to carry on to the far end of this eastern side of the headland as far as I could. 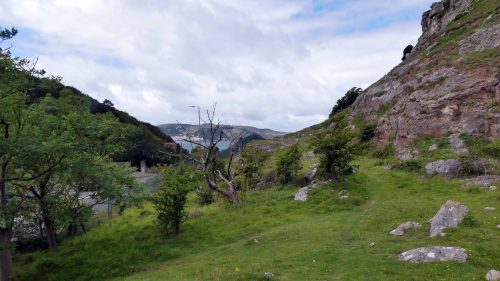 Up on the cliff a patch of harebells gave a rare opportunity to get close to these lovely little flowers without having to lie on the ground. They look delicate and their thin stems seem fragile, but they are tougher than they look and were holding their own in today’s wind. 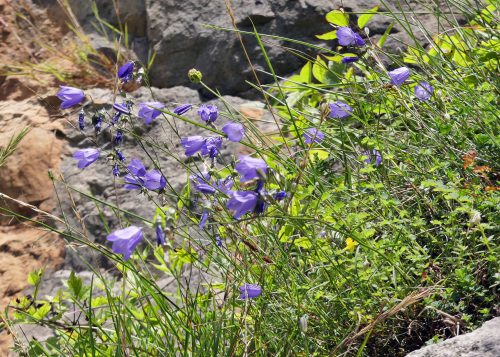 Spiky starry Carline thistles caught my eye. Kneeling to photograph them I see they are growing amongst bird’s-foot trefoil and that there is another little star there too – a tiny white flower of Pearlwort. 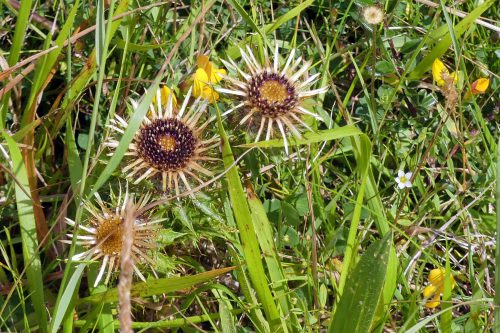 There is Yellow-wort flowering next to Wood sage which is setting seed. 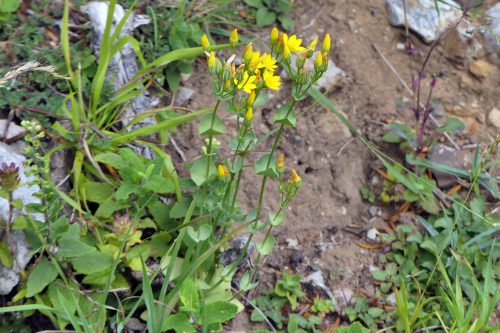 Another Carline thistle, this time with Eyebright and an unwelcome invader, cotoneaster, one of the banes of the lives of hard-pressed reserve managers. 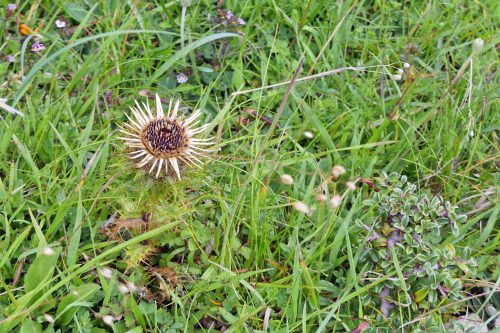 Nearby, more Harebells with a little pink Centaury and the grey felty leaves of Mouse-eared Hawkweed. 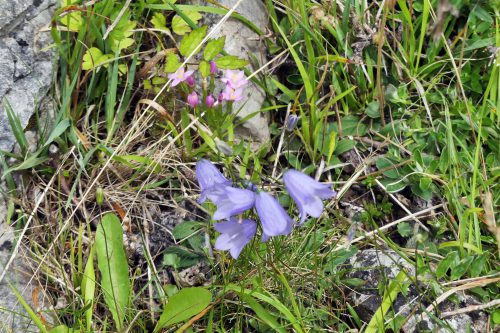 I was almost relieved to reach the end of the track and be blown back to retrace my steps to the beginning of the upward track. 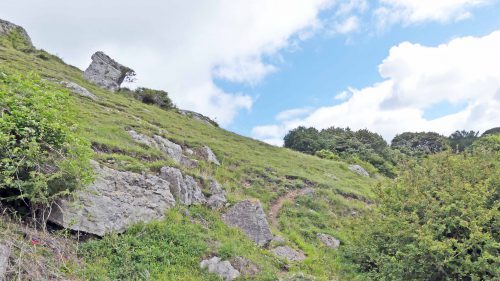 First I went ‘off piste’ a little to reach a stand of golden yellow Ploughman’s Spikenard. 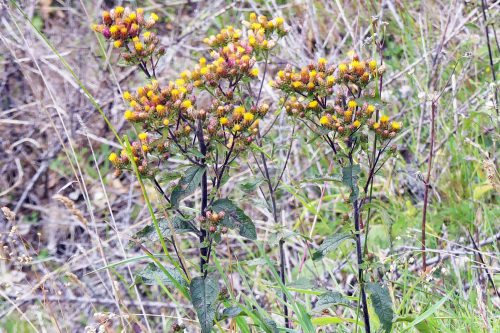 Then a scramble back down to the start of the track proper. A badged wooden post here reassures you that you are officially following both the Wales Coast Path and the North Wales Path. 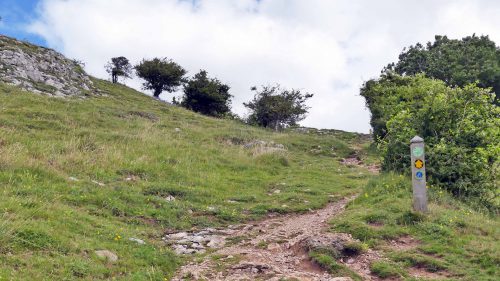 15 thoughts on “A Windy Wildflower Trail”