Frothy sunshine-yellow Lady’s Bedstraw brightens the grass and on this warm sunny day scents the air with the delicate fragrance of fresh-cut hay.

Medieval legend has it that the Virgin Mary lay on a bed of Lady’s Bedstraw in the stable of the inn in Bethlehem, as the donkeys had eaten all the other fodder. It is from this legend that the common name for the plant was taken, and also led to the belief that a woman lying on Lady’s Bedstraw would have a safe and easy childbirth.

Lady’s Bedstraw is a plant of dry grassland, dry banks, downs and old established sand-dunes.  On warm sunny days the air surrounding the frothy yellow flowerheads is deliciously fragranced with the scent of lightly perfumed fresh hay. Lady’s bedstraw is a food source for the huge Elephant hawk-moth caterpillar, then is favoured by the adult moths as a rich source of nectar. The migrant Humming-bird Hawk Moths are attracted to it too.

Lady’s Bedstraw was once one of the most useful of the meadow flowers; it was commonly used as a ‘strewing herb’, a natural form of air-freshening and for stuffing mattresses.  In the north of England the yellow flowers were once used to curdle milk, giving rise to several associated names such as cheese rennet and cheese renning. The leaves and stems yield a yellow dye and the roots a red dye; it was said that when cattle feed on it, it reddens their bones.

Lady’s Bedstraw contains the chemical coumarin, used in the drug dicouramol, which will prevent the blood clotting. In herbal medicine it was claimed the herb was a remedy for for urinary diseases, epilepsy and gout.

Keeled garlic, whose flowers attract Common Blue butterflies and the long stand of Hemp Agrimony on the woodland edge are in bud. 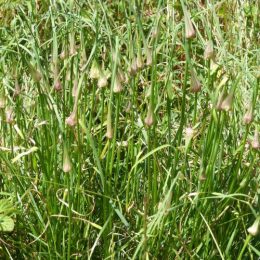 There are tiny acorns on the Oaks; stalked ones on the Pedunculate Oaks and tight-to-the-twig ones on the Sessile Oaks. 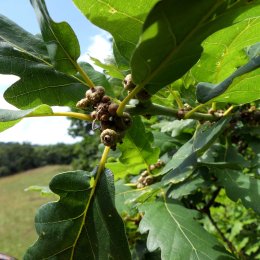 Up here on the near-summit rocky cliffs I spot a single lovely Grayling. It settles on a warmed rock close by and I manage to catch it before it folds away the orange markings on its upper wings.

I am fascinated by the butterfly’s cryptic camouflage, its ability to melt into the rocks it settles on to bask. If I take my eyes off it I have to wait until it flits off again to relocate it. Unless it lands on my shoe! 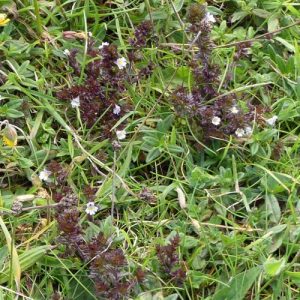 I was keen to get a good number of shots of this obliging subject, as in this location at least their appearances are not always predictable.This year I’ve had a few sightings, last year none at all. After a few minutes of following it from rock to rock I realised the butterfly had no immediate plans to go far, so I relaxed a little and sat for a while on a patch of grass.

There’s a whole other realm cuched down in these often- dry grassy-rocky areas. In the little patch where I chose to sit Common Milkwort was growing through Wild Thyme in a rocky crevice and nearby the tiny yellow dots of a creeping Hop Trefoil marked its presence, punctuated with taller purple-leaved Eyebright.

I spotted a bright yellow-green beetle scurrying through the vegetation, thinking this must appear to him to be a veritable jungle. I had wondered what Sulphur beetles got up to when not gorging on hogweed.

Sulphur beetle scurrying through the jungle of short grass and thatch

There were large mushroom-like fungi growing amongst the grass here. Many were clearly being eaten by something – voles, mice? Maybe even slugs or snails.

A neat hole right through the cap

This one was turning unpleasantly slimy 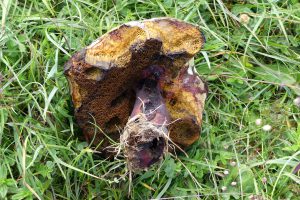 Someone had turned this one over to reveal the ‘spongy’ underside

Then, further down the slope, the very thing I had been crossing my fingers hoping to see- a flash of orange that was a Dark Green Fritillary taking off vertically from a Common Orchid. 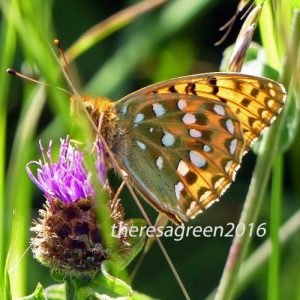 There is a small colony of these lovely fritillaries here; the most I’ve ever seen at the same time in a season was 10-12. That year the Knapweed and Scabious they prefer to nectar on, were more fully in flower than now . Thus far I have seen only two at the same time. Today there was just the one. I hope there are a few more to come. The butterfly returned to nectar on one of a few Knapweed flowers fully opened. It shared the space with a chunky insect I am trying to find the identity of.

The fritillaries are large, fast flying and tricky to approach. Sensibly they have also based themselves within a particularly brambly, steep and uneven part of the hill that restricts access. That means grabbing images as and when you can – but I like that, it keeps them ‘real’, so you see the butterfly as I did – mostly through a grass curtain. 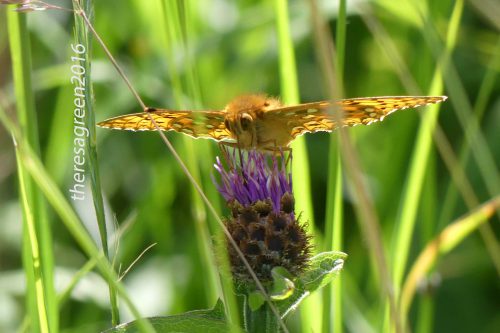 From the Fritillary patch to the bramble patch and sightings of Small Heath, a couple of Ringlets, a Large Skipper, Speckled Woods and hoverflies.

Sun Fly or The Footballer

And to finish with a flourish, one of my favourite beetles, Strangalia maculata.

15 thoughts on “Things Bright and Beautiful”