The first week of June was full of the promise of a glorious summer to come. A  run of warm sunny days had brought forth perfect and prolific blooms and began to coax out the butterflies.

Along the woodland trail that circuits the lower slopes of the Bryn Euryn Nature Reserve, the early summer wildflowers are peaking. Foxgloves are at their perfect best, with stems full of open blooms graduating upwards to buds. There are not many plants on this site, but they seem to be gradually increasing in number year on year.

Honeysuckle is blooming prolifically, the best I have ever seen it and it smells heavenly. 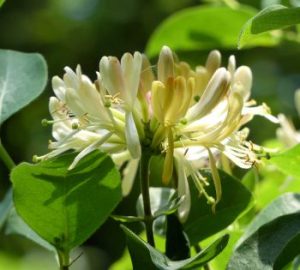 The wild strawberry patch is also full of flowers, promising a bumper crop to come,although it is in danger of becoming overwhelmed by encroaching ivy and other vegetation. 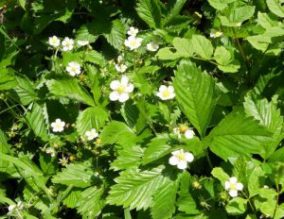 Birds were heard but not seen, concealed by the dense foliage of the tree canopy; Chiffchaff, Wren, and Blackbirds were all still singing between nesting duties.

Some of the clumps of grass that grow along the woodland tracks are flowering now. This is False Brome-Brachypodium sylvaticum, a perennial grass common in woodlands where it prefers the shade of the canopy. 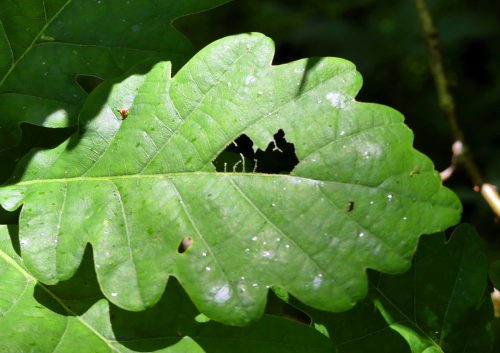 Oak leaves are already being eaten

One of the more severe winter storms brought down three Scots Pines. Two have been sawn up and cleared away but the largest has been left where it fell and poignantly continues to live, now producing new cones.

Beautiful fresh Speckled Wood butterflies were out in number and busy patrolling territories or sitting on leaves, wings closed in wait for intruders or potential mates.

Up the steps and into the small open meadow the first impression was of lush greenery. The grass is growing long and closer inspection reveals it is studded with purple and white clovers, yellow Common Rock-rose and buttercups and the curiously flowered salad burnet.

A variety of meadow grasses with Common rockrose and Salad burnet

Along the edge of the tree-line another burnet, the beautiful Burnet Rose (visible centre left of the photograph above) is also in full flower. It too smells divine and was absolutely buzzing with a variety of bumblebee species revelling in the pollen and nectar bounty on offer.

In previous years I have noted that the Burnet roses have played host to a bright orange fungus, this is Rust fungus Phragmidium rosa-pimpinellifoliae. It doesn’t appear to harm the plants, but this year the fungus is almost as prolific as the blooms themselves.

On the small rocky outcrop at the top end of the field there are pretty clumps of Common Rock-rose-Helianthemum nummularium.

A glint of emerald green drew my attention to a tiny shiny beetle in the centre of a Rock-rose flower. This little Jewel beetle doesn’t appear to have a Common name, so is known by its Scientific name of Cryptocephalus aureolus. The generic name of the beetle and its relatives refers to the insects’ heads being hidden under the pronotum. This is a new species recording for me here on the Bryn, which is not to say they haven’t always been here, just that I hadn’t seen one till now

I saw some little butterflies from here, a couple of Common Blues and Small Heaths, but all flying low in the long grass and in no mood to settle to pose for portraits.

Onwards and upwards along the Summit Trail, taking the track that comes out at the bottom of the steep ‘downland’ slope. This is often a good place to find Common Blue and Brown Argus butterflies, but not today, although there were a good number of Small Heaths to be seen, again not settling for me. 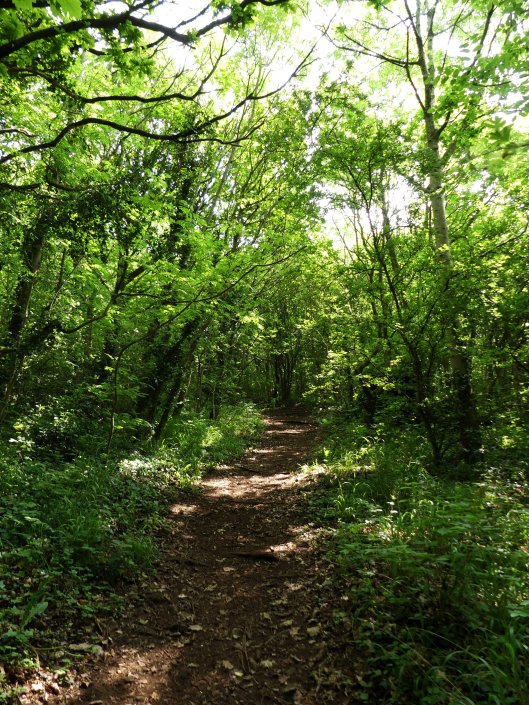 I progressed fairly slowly up the steep slope and near the summit was  attracted to a sheltered corner backed by trees, bordered by raspberry brambles and where the ground was covered by Common Rock-rose and Bird’s-foot Trefoil flowers. I was drawn there by the sight of a small brown butterfly, which I hoped may be a Brown Argus, but which turned out to be a female Common Blue.

Then I noticed a slightly larger brown flutterer that I thought at first was a moth. A closer view changed my mind, this was a butterfly and although it was rather faded and a bit tattered round the wing-edges, was the right size and shape for a Skipper. Old records for the site indicate the presence of the Dingy Skipper-Erynnis tages, whose common name may not inspire much excitement, but this is a fairly uncommon butterfly in the UK, with recorded sightings at sites in North Wales not exceeding low single figures. I hope now my ID is right – if anyone knows better, please let me know!

Dingy Skipper from a distance

I’m sure I’m not alone here, but I get nervous when I’m confronted by a new-to-me species of anything; especially when I’m aware this may be my one and only chance to record a sighting. So, I find I hold my breath, begin to panic slightly that I won’t get a photograph that will help me confirm its identity back at home and pray no-one will pass close by and disturb my target. My ‘technique’ thereafter is quite basic – to start from a distance and gradually move in closer, capturing as many images as I can before my subject takes off!

This particular butterfly was not making things easy and was restlessly flitting about amongst the flowers, staying low to the ground and frequently hidden amongst the plants. I felt quite dizzy staying focussed and following it around, probably down to lack of oxygen intake from the not-breathing. As ever, I would have liked more opportunities for photographs, but did manage to get a couple of fairly clear images that at least have given me my sighting record. 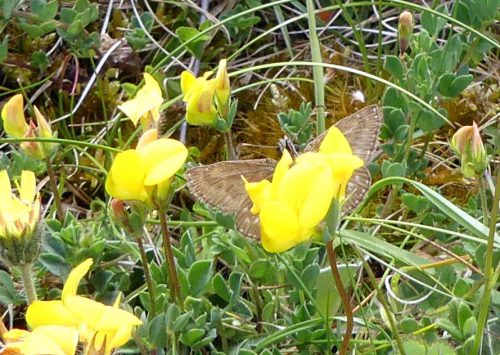 After a few moments the butterfly took off away down the hill and I lost track of it. The camera battery also chose that moment to expire and as this had been a spur of the moment, travel light walk, I had no spare with me!

I have written detailed posts about many of the subjects mentioned in this one, so rather than repeat myself, I have added links to click onto if you would like to see more about any of them. For more about the Dingy Skipper, go to http://butterfly-conservation.org/679-1101/dingy-skipper.html

12 thoughts on “Beautiful blooms and some rare treats (1)”