I’ve recently spent two weeks in London with my youngest daughter, awaiting the arrival of her first baby. She was a little bit late, as babies often are, so to alleviate everyone’s tension a little, my son took over ‘ entertaining mother duties’ for a couple of days. He lives in North London near to the lovely  Alexandra Palace, and he took me there for some much-appreciated exercise and a glimpse of some natural scenery of the surrounding Alexandra Park.

On the way there we walked by a children’s playground and I could not pass it by without acknowledging the large recumbent and clearly friendly dragon that forms an imaginative raised play area. 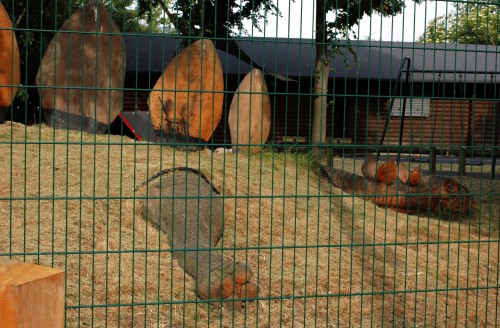 Play area built on the back of a dragon 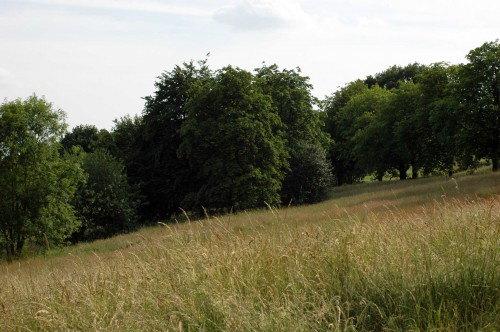 Long grass on the hillside of Alexandra Park

I was pleasantly surprised by the amount of space left in a natural state. 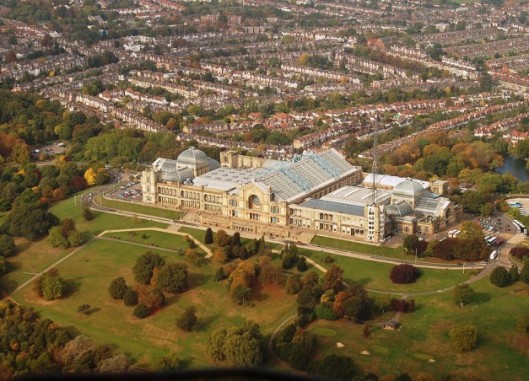 Alexandra Palace & some of its surrounding parkland (photo from official website)

Alexandra Palace is set atop a steep hill located between Muswell Hill and Wood Green, in the north of the city. Alexandra Park was opened by the renowned landscape architect Alexander McKenzie as a pioneering Victorian leisure Park and centre for education and entertainment.Originally opened in 1873 but rebuilt in 1875 following a destructive fire, it was designed to serve as a public centre of recreation, education and entertainment and as north London’s counterpart to The Crystal Palace in south London. It was always intended as “The People’s Palace” and later nicknamed “Ally Pally” (supposedly by Gracie Fields)

Managed by the Alexandra Park and Palace Charitable Trust, the Park’s 196 acres of Grade II listed English Heritage parkland is maintained by a specialist team dedicated to ensuring the beautiful landscape is well preserved and remains very much at the heart of the local community. 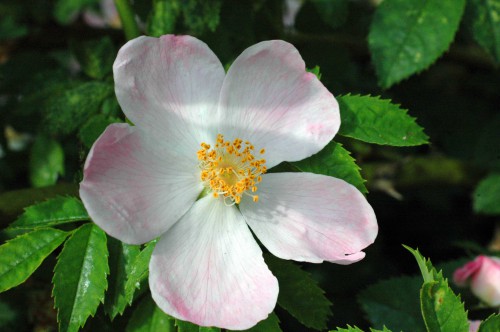 I stopped to photograph elderflower blossom and spotted the first of several ladybird larvae I was to see on and around the elder tree. 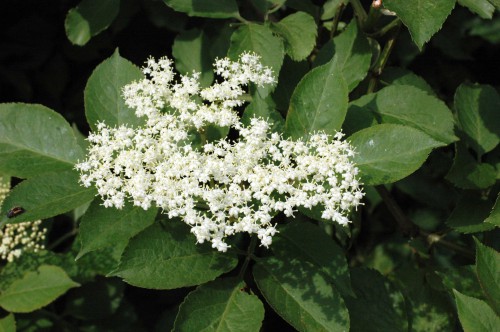 The larvae were quite sizeable, so would be classed as ‘juvenile’, in a late instar form. I didn’t recognise which species of ladybird they belonged to, although I did think it unusual to see so many and that they were out in the open. 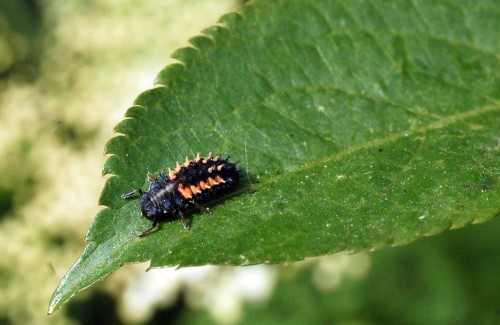 Ladybird larva on an elder leaf

A ladybird larva has four instars, i.e. it sheds its skin four times as it grows. Early instar larvae are very small and difficult to identify, but third and fourth instar larvae, particularly of the larger ladybird species are more recognisable. 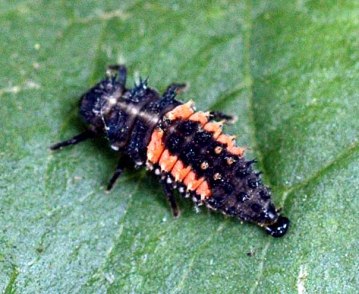 Then I saw a ladybird actually in the process of emerging into its adult form and it clicked that these were a new generation of the invading alien Harlequin ladybird – Harmonia axyridis. 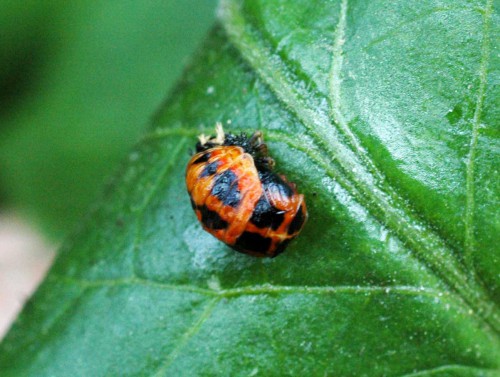 Harlequin ladybirds, native to Asia,  were introduced to north America and mainland Europe as a biological control for aphids, but their voracious apetites and the subsequent decline of native ladybird species has focused attention on them as a subject for control. Large numbers hibernate indoors and in wall cavities during cool winter weather, which doesn’t help their cause.

A recent article in the Guardian newspaper names the species as the world’s most invasive ladybird and states that “Harlequin ladybirds have been declared the UK’s fastest invading species after reaching almost every corner of the country in just a decade. The cannibalistic ladybirds were first realised to have reached the UK in 2004 when they were seen in Essex and have since spread as far afield as the tip of Cornwall and the Shetland Islands, making it the fastest alien invasion of the UK on record.

Dr Helen Roy, of the Centre for Ecology and Hydrology, said a decade of sightings recorded by the public as part of the UK Ladybird Survey since 2005 have revealed just how far and fast the harlequin has spread… adding that it is now consolidating its presence in the UK. 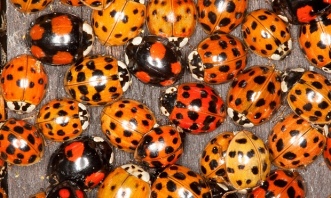 Harlequin ladybirds are variable in their appearance (image from the Guardian)

The species is believed to be responsible for the decline of at least seven native ladybirds, including the popular two-spot, which when last assessed in 2012 had slumped 44%. Dr Roy said that there has been no sign of a recovery among two-spots.

On a brighter note, it may be that Harlequins have some benefits as they prey on a variety of smaller insects, especially aphids which can damage crops and garden flowers, but the extent to which they protect plants is undetermined. There is also evidence to suggest that native insects may now have adapted to prey on the Harlequins, helping to keep numbers in check.

The invasion of the Harlequin ladybird (Harmonia axyridis) threatens our native populations. If you want to know more about this species in particular, or want to record sightings, please have a look at the Harlequin Ladybird Survey website.

Moving on I found more beetles on a hogweed flowerhead, the large one is a Longhorn beetle. 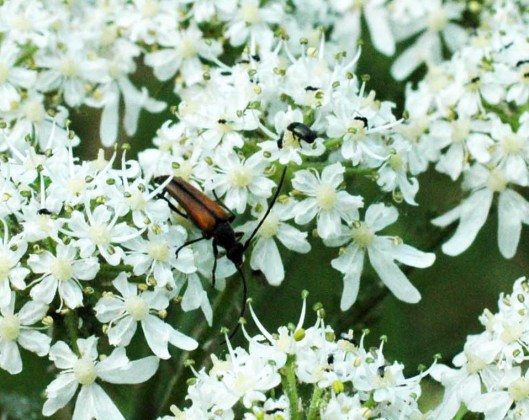 We walked along an avenue lined with enormous London Plane trees and stopped to look at some of  the Fallow Deer in the enclosure. Alexander Mackenzie included a small deer enclosure when he designed the original layout of the park. Fallow deer were reintroduced to Alexandra Park by the GLC and the small herd here today are their direct descendents. 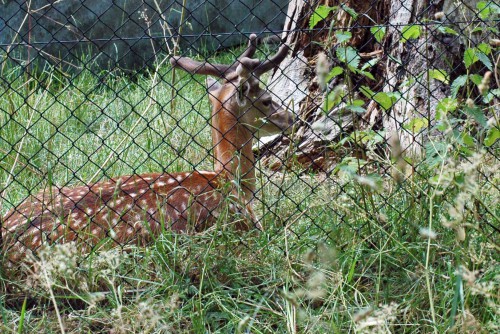 We strolled around the boating lake, eating ice cream and watching mallards, several of which were females with varying-sized ducklings, coots, tufted ducks and canada geese swimming around. At the far end of the lake a flock of opportunistic pigeons and a couple of grey squirrels were feasting on food probably put out for the ducks.

We hadn’t gone to see the Palace itself, but I couldn’t not mention that of course this is where the world’s first television broadcast was transmitted from. 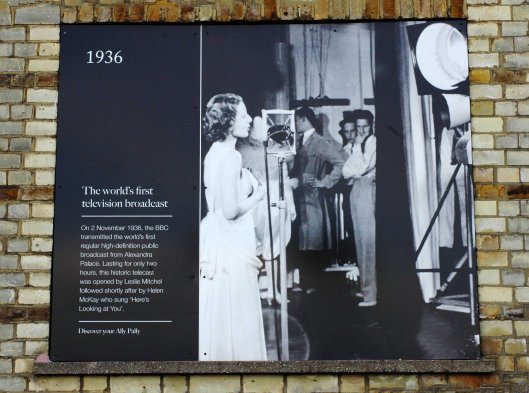 I loved this round stained glass window too, it must be even more special viewed from inside the building with the light shining through it. 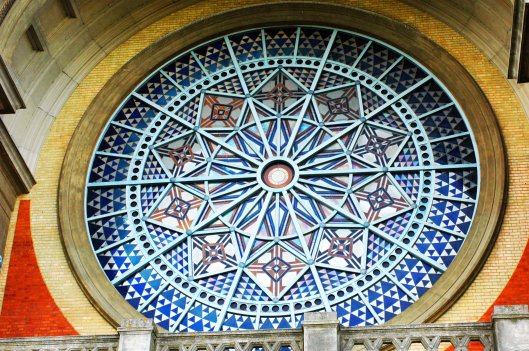 We had come to the top of the hill for the views – from the terraces of the Palace there are spectacular panoramic views of London’s skyline. 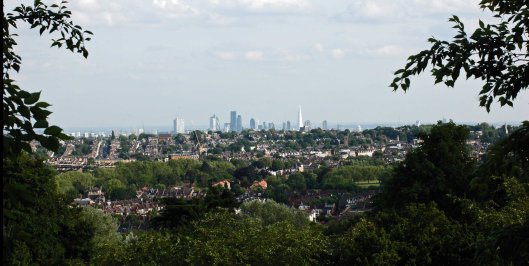 View to the London skyline

The breathtaking views stretch from Canary Wharf to St Paul’s Cathedral and the Shard. The view extends as far as Crystal Palace, with its transmitter being visible on the horizon. (Click on images to enlarge them) 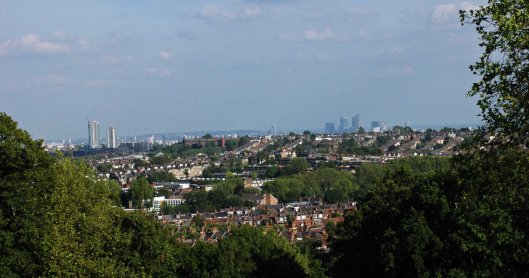 5 thoughts on “Alien invaders in the Ally Pally Park”