On a recent drive back from the supermarket in Llandudno. It was a lovely sunny afternoon and the countryside looked so beautiful I made a couple of stops to take these photographs. I love this time of year when the shape and structure of the fields and the architecture of the trees and hedgerows is visible and highlighted by the bright sunlight. 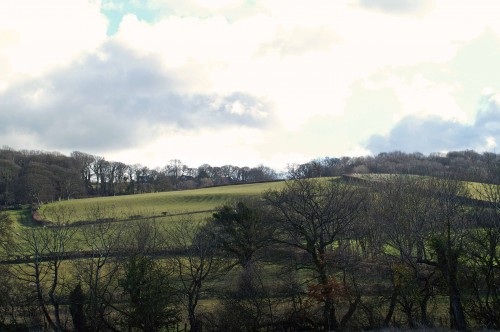 There is a rookery located in a stand of  trees close to the road I was driving along; rooks are early nesters, sometimes having eggs in the nests by the end of February. I was hoping to get a couple of  pictures that would show them in some detail to compare against the related carrion crow, but although there were plenty about they were all either  flying or  foraging in the nearby fields.

Rook – Corvus frugilegus. The species name frugilegus is Latin for “food-gathering”. The adult rook is the only large black bird with a bare grey/white face patch. They can be told from the similar-looking Carrion Crow by the purplish gloss to its  plumage and the baggy appearance of the thigh feathers.

The UK has the largest population of rooks in Europe. They are gregarious throughout the year, characteristically nesting communally in the tops of trees in ‘rookeries’ and collectively known as a ‘parliament’. Nests are built from twigs freshly picked by industrious individuals and are very likely to be plundered by unscrupulous neighbours. There is a distinct ‘pecking order’ in the community; the oldest bird lives at the centre of the rookery, best protected and sheltered from the wind. When the flock is feeding, rook sentries are posted to warn the others when danger threatens.

In folklore they are reputed to be able to predict the weather; rooks feeding in village streets or close to nests in the morning means inclement weather is to come – usually storms or rain. Conversely, rooks flying far from their nest means fair weather.

The presence of a rookery on your land is considered to be lucky in many parts of the country and that should the birds decide to abandon the rookery ill-fortune would befall the family. Rooks used to be told of a landowner’s death. The new landowner would stand under a rookery and give the news, usually adding the promise that only he and his friends would be allowed to shoot the birds in future. If he neglected the ceremony, the birds would desert the rookery – an evil omen in itself. This forecast the loss of the land and downfall of the family through poverty. 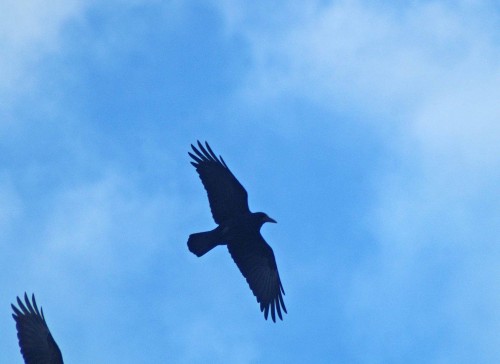 Passing by the  field the curlew occupy I noticed a number of ducks on the water that pools there when it rains. As I already mentioned, it was a very bright sunny day and unfortunately the only vantage point I had from which to photograph the birds involved shooting into the sunlight, rarely a good move, but I wanted to record the sightings. I thought the ducks were Pochard, but could not really see properly. As I watched they left the water and began moving over the grass, heads and beaks down, almost perfectly synchronised. I’m not great at duck identification, so if anyone can tell better  from my rather blurry image that they are not pochard, please let me know.

I had no problem identifying the male shelduck there all alone. 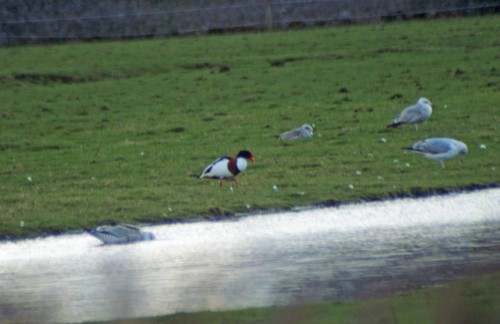 a single male Shelduck making for the water