The variety of  wading bird species regularly foraging on the seashores of Rhos-on-Sea and Colwyn Bay remains pretty much the same as reported in the late summer/autumn of last year; i.e in the main, curlew, oystercatcher, redshank and turnstone. The numbers of  individuals of some species has decreased, but there are still plenty to be seen and in respect of studying the birds more closely, I find that less is more. With fewer numbers to distract my attention I concentrate more on watching individual birds and pick up on aspects of their behaviour, the way they move, how they feed  and such like.  I seem to find this the most effective way to assimilate information about a species and how I learn to identify them more quickly in different settings by means of what practised birdwatchers call the bird´s ´giss´ (general impression size and shape).

Oystercatchers are resident here and there are always plentiful numbers to be seen and heard in a variety of places along the seashore. They are very distinctive in their appearance and its long orange bill make it unlikely to be confused with any other large pied wader .

Curlews are best seen once the tide is quite well out as they arrive to forage around the exposed rocks and shallow pools. Despite their size and bulk, their cryptic camouflage is so effective that they can be difficult to pick out against the background of rocks, particularly those that host colonies of periwinkles. Once you have spotted one, more seem to magically appear, rather like those 3D pictures that were fashionable a few years ago that required your eyes to go slightly out of of focus before the image was revealed. 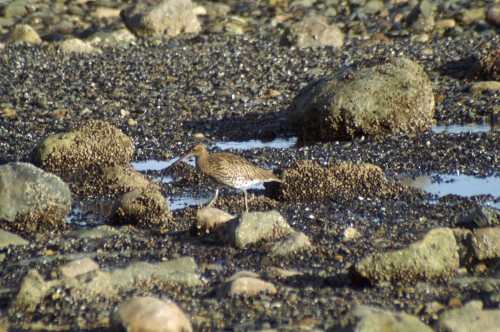 There is plenty of space here and the birds range widely across it. Often they may be spotted foraging independently and sometimes in small groups of two or three. I have only once witnessed an altercation between two individuals when one decided to oust the other from what was clearly a prime pool.

Turnstones waiting for the tide to turn take the opportunity to rest quietly on the big rocks of the breakwater, springing into action as soon as the first strip of the shoreline is revealed by the retreating water.

The particular spot I photographed the birds in is a favourite roosting spot quite close to the edge of the promenade, but they are not in the least perturbed by passing people or dogs. They know exactly when the water will begin to retreat and some of the birds move nearer to the sea edge to wait despite being splashed by waves. 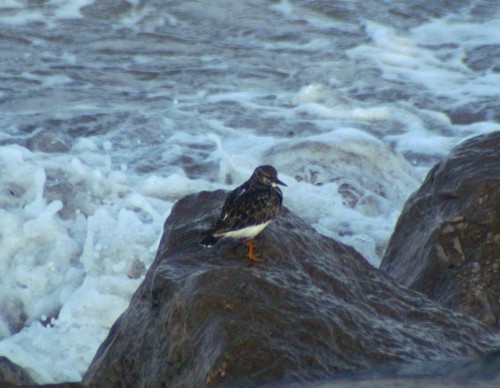 Turnstone on a sea-splashed rock

Occasionally the cold shower pays dividends and a stray shellfish may be thrown up nearby.

A Turnstone seizes a mussel thrown up by a wave

Those on the alert quickly move further down the shore to be the first to explore the first areas to be exposed by the retreating water.